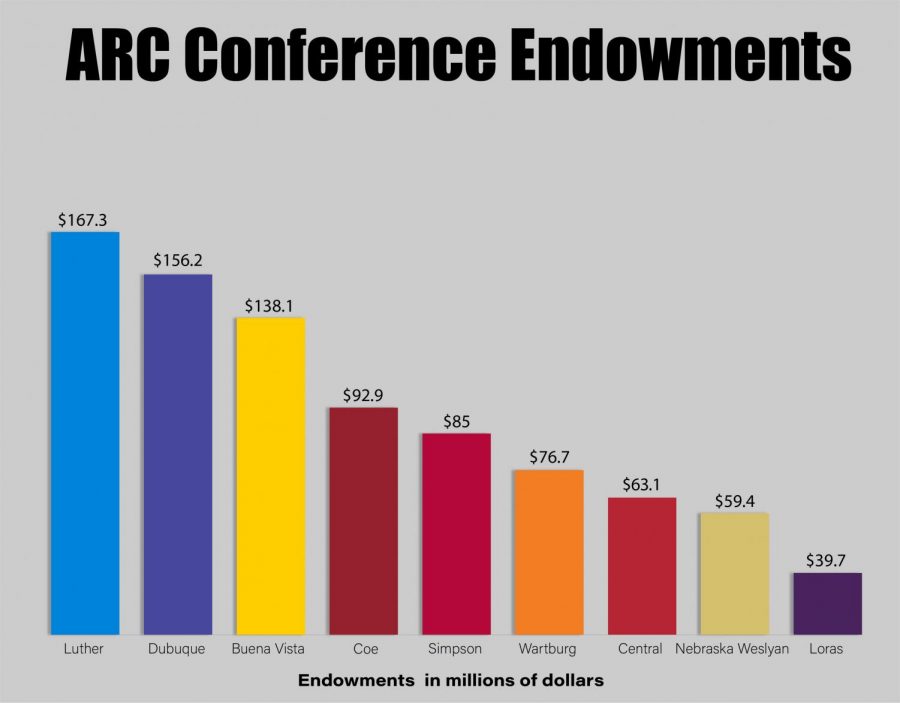 On Feb. 12, Simpson College’s Student Government Association emailed that night’s meeting minutes, which included a brief update about the college’s endowment growing from $78.61 million to $85 million.

According to Lane, an endowment is a collection of funding that is invested in the college and used to pay for a variety of operations, such as scholarships. Like a savings account or retirement fund, the endowment grows based on these investments, with the range increments and decrements vary depending on the stock market.

Another factor of the endowment’s growth involves fundraising, these are referred to as gifts. According to Lane, these gifts grow through stock market appreciation on property held in Simpson’s endowment.

“Many people will make gifts to the endowment,” Lane said. “In other words, they will endow a scholarship, for example, which means they will give the college money for us to invest and we take those earnings and provide students like you and other scholarships out of that.”

For Lane, the growth reported on Feb. 12 was a significant one over the course of a year.

“That’s why across the spectrum of colleges and universities, you’ll see a lot of different growth patterns,” Lane said. “For example, if you go back to when the recession hit in 2008, most colleges saw their endowments go backwards quite a bit. Again, because they have so much invested in the stock market, [there was] nothing they were doing wrong [and nothing they] could control. It was because of the market and the economy of the country.”

Vice President for Business and Finance Cathy Hoch also weighed in, citing a good year in the stock market and the campaign for making gifts as helpful to the endowment’s growth.

“It’s all dependent on what the market is doing,” Hoch said. “If you’re looking at a year, you can have 11 months that when the stock market is great, and [there are months when] it could completely bottom out. It’s all timing.”

Lane and Hoch hope to clarify misconceptions surrounding how endowments function, who makes decisions around how the money is spent and where the money for Simpson’s endowment comes from.

“[The financial advisors] provide [the Endowment Management Committee] with a book full of information about what they’re seeing in the marketplace: how our investments are doing, and if they recommend we make any changes to our current investments,” Hoch said. “Based on that information, the members of the subcommittee can ask questions, and then they ultimately would vote on whether or not to make the changes that were recommended.”

Another example of misconception surrounding the endowment is the money in Simpson’s endowment can and should be used for more immediate purposes, such as constructing buildings. According to Lane, since the endowment acts as a reserve for funding long term operations, such as scholarships, this is not a solution.

Hoch also pointed out the donors themselves may have certain conditions for how their gifts will be used. For example, if a donor contributes a sizeable gift, they may note that they want the money to be used for a journalism scholarship. This presents an ethical obligation to put that money to its intended use in exchange for funds at all.