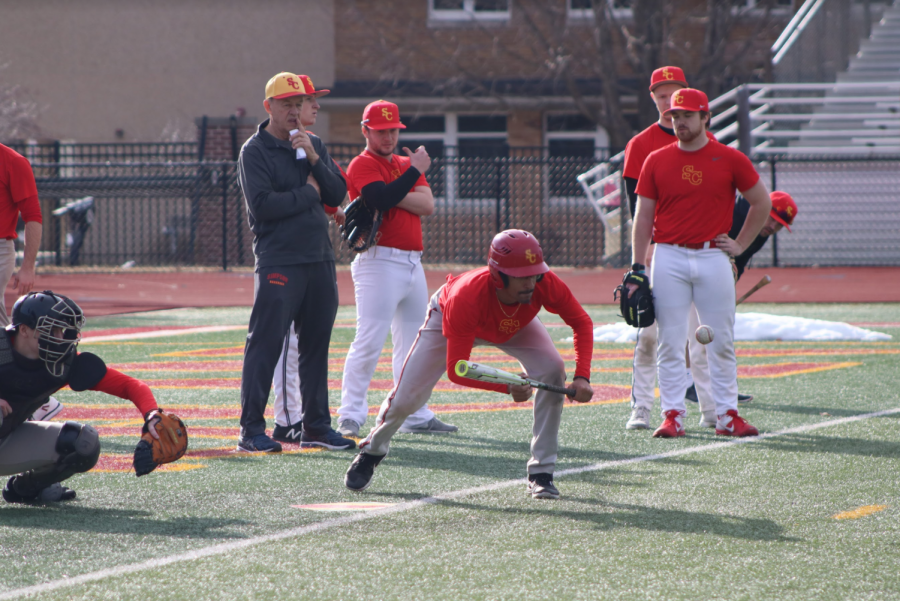 Simpson baseball opens its season this week with a doubleheader against Bethel University in Minneapolis, Minnesota at U.S. Bank Stadium on Feb. 26. The Storm are coming off a 2019 season where they went 13-23 overall and 5-19 in American Rivers Conference play.

The Storm enters the preseason tied at seventh with Loras in the American Rivers Conference Preseason Coaches’ Poll. At the top of the list is Coe College followed by Buena Vista in second, Luther in third, Dubuque in fourth, Central and Wartburg tied for fifth, Simpson and Loras tied for seventh and Nebraska Wesleyan rounding out the list in ninth.

Roling is looking for a big leap from last year’s season.

“I’m excited. We’ve got a really good group of young men who have worked really hard. They deserve to see the fruition of their hard work because they have been through a lot. I’m excited to see their progression,” head coach Nathan Roling said about his team.

After Wednesday’s games against Bethel, the storm has a two day series at Westminster College in Fulton, Missouri. After that, the Storm will travel down to Auburndale, Florida to play a week’s worth of baseball against teams from all around the country.

“We play a lot of games in a short amount of time, so really for us, it’s just a time to really find out who we are and play some different pieces and get a lot of baseball in a short amount of time,” Roling said. “Learning a lot about ourselves competing against teams from all around the country. It will give us a good feel for where we are at while getting the opportunity to get some good wins as well.”

The Storm is hopeful because they are bringing back big pieces from last year’s season, such as sophomore pitcher Brady Held and senior catcher Truman Schmitt. Both received conference honors last year with Held named honorable mention in his freshman campaign. Schmitt was named second-team all-conference, first-team American Baseball Coaches Association/Rawlings in the Central Region and D3baseball.com second-team All-Central Region.

“The guys that were good for us last year, Truman Schmitt, Brady Held, Kolton Arnold and Noah Sacco, have continued to make progress and have shown themselves to be big pieces to what we are going to do,” Roling said. “We don’t have a ton of newcomers, but there are some guys especially on the pitching side that have looked good and we are excited. Our biggest strength is going to be our depth offensively.”

Coach Roling wants to see improvement not only from last season but throughout the entire season that will drive success for years to come and help put the program in the right position to compete for championships.

“We want to leave the field every day knowing that we never took a day off, to then bigger goals of making the conference tournament and competing at a high level in the conference, whether that means competing for championships this year or the next year or two,” Roling said. “We want to win every game that we go into, and we want to compete at the highest level that we can. The next step for this team is to make the conference tournament and see what we can do from there.”

The Storm start conference play on March 21 at Buena Vista at 6 p.m. and their first home game against Iowa Wesleyan is on March 25 at 4:30 p.m.