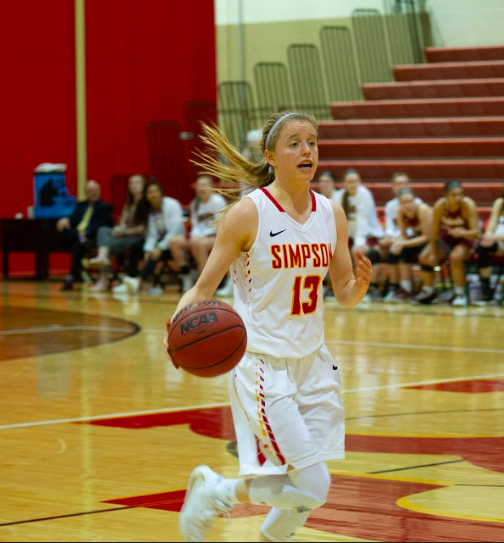 Simpson’s bench scored 48 points in a 109-84 victory over Nebraska Wesleyan at home on Wednesday night.

A strong bench performance was highlighted by Jenna Taylor’s 18 points in the first half. The Prairie Wolves held a lead for 25 seconds, but a Taylor 3-pointer gave the Storm the advantage for the remainder of the game.

Another spark came from senior guard Megan Todd, who went 4 of 4 from the field for a season-high 11 points.

“We push the starters in practice,” Todd said. “We are always doing the best we can, working as hard as we can. It’s obviously a team effort on offense as well as defense.”

Simpson had its second-highest field goal percentage of the season, shooting 58.3 percent on 42 of 72 from the field.

Coach Brian Niemuth explained how the Storm bounced back after a season-low 35.1 percent performance against Wartburg last Saturday.

“We did a better job,” Niemuth said. “Especially in the second half with moving the basketball and attacking the paint. We talked this week about playing to our strengths. I wanted shooters shooting and I wanted people that drive to put the ball on the floor.”

This was the first time the Simpson forward tallied double figures in scoring since Jan. 22. Chubb described the process to get her back on the court after suffering an ankle injury in late January against Luther.

“Not being able to play with my best friends definitely took a toll,” said Chubb.  “But I watched them and saw what we needed to work on from an outside view. I feel better than ever and I can’t wait for these next weeks to come to keep playing with my best friends.”

Despite holding Nebraska Wesleyan’s Caitlin Navratil to 6 points the last outing, the guard returned to form with 24 points, shooting 10 of 19 from the field.

“We focused for two days in practice on trying to stop her,” Niemuth said. “She is just one of the best players around. She got her points tonight, but she had to earn them. She played forty minutes and never took a break.”

The Storm returns to Cowles Fieldhouse this Saturday at 2 p.m. for the last conference game of the regular season against Buena Vista.