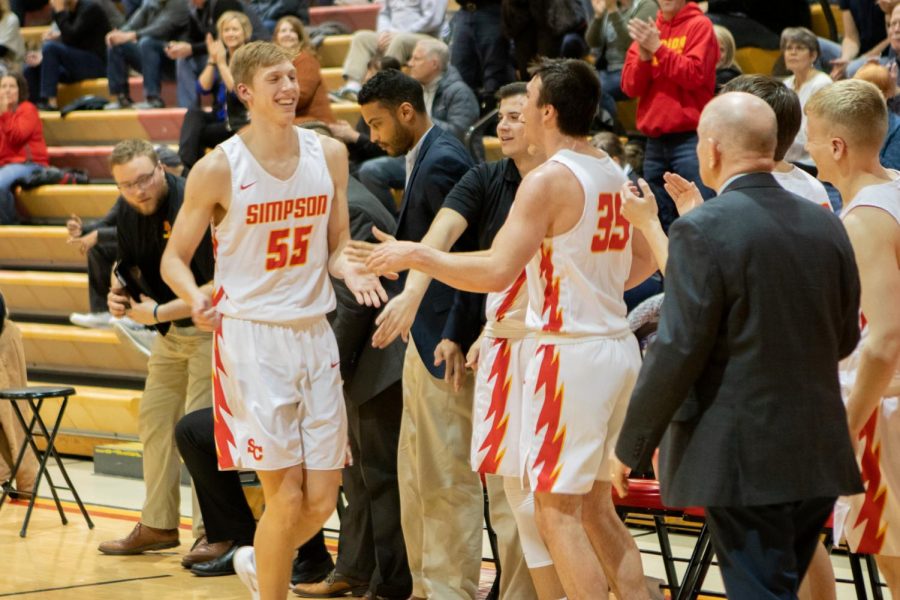 Going into the game, not many people outside of the Simpson men’s basketball team locker room gave the Storm a chance against No. 6 Nebraska Wesleyan on Wednesday night.

After all, the Prairie Wolves were 14-0 in the American Rivers Conference and the Storm has had its fair share of struggles this season.

But, Simpson took control right from the gate and dominated the defending conference champions in Indianola, winning 86-59.

“It’s just big,” senior forward Kyle Wagner said. “I mean, everybody knows it, we’ve struggled a little bit throughout the year. We knew collectively if we could put it together, we were more than capable. Tonight we had it rolling and showed what could happen.”

Simpson came out and set the tone early, leading by as many as 16 in the first half. They took a 35-25 lead heading into halftime.

The Storm opened up the second half with a 16-4 run and led by 22 points just five minutes into the half. From there, they continued to extend the lead throughout the second half.

Head coach Brad Bjorkgren said he was proud of his guys because they stuck with the game plan and gave great effort.

“We thought we had a pretty good game plan, but it was kind of the same plan we used when they beat us at their place,” Bjorkgren said. “Tonight we made some shots, so that’s what probably made it a little easier. We were able to get back on the defensive end and do what we want to do because we made shots.”

The Storm shot 53.3 percent from the field, compared to Nebraska Wesleyan’s abysmal 30.9 percent.

Wagner led the squad with 25 points and 6 assists. Senior guard Conor Riordan had 23 points and senior center Adam Reiter had 19.

Simpson is currently vying for a spot in the American Rivers Conference tournament. With this win and a win on Saturday against Buena Vista, the Storm is all but guaranteed a spot.

Wagner hopes this win will give them confidence leading into Saturday.

“We showed we can play with one of the best teams in the country, and the best team in our conference, so that’s big for sure,” Wagner said.

The Storm play against Buena Vista at home on Saturday, Feb. 22.