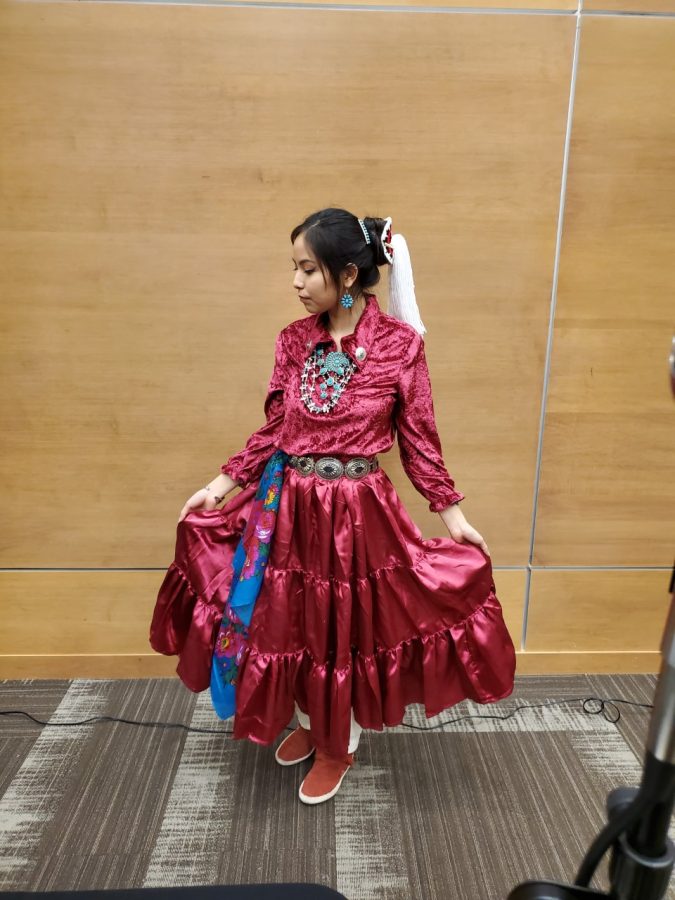 The Native American and Intertribal Student Association is a small group on campus that was founded by Shaya Curley this past fall.

“I see other clubs such as Latinos Unidos and BSU. I thought, `’Why can’t I do that?’” Curley said.

Curley is a first-year student from Arizona and is a full-blooded Native American. She is part of the Navajo Nations.

As part of her SC 101 class, she had to do a social justice project. In turn, Curley founded the NAISA. Curley wants to advocate for members of these communities, but also educate others.

“This organization strives to pursue, to create awareness and opportunities of Native American and Alaskan Indian culture. Also, to educate the public and encourage others to do so as well,” states the group’s mission, which was printed on pamphlets they handed out at Simpson’s annual Thanksgiving dinner back in November.

Curley opened the dinner with a greeting and a blessing in her native Navajo language while wearing a traditional dress. The group hopes to have more opportunities to educate students at events like the Thanksgiving dinner in the future.

“One event we plan on is showing a film involving the missing and murdered indigenous women,” Curley said.

Carolyn Dallinger was the professor for the SC 101 Trail of Tears. Curley’s advisor discussed the group’s first potential showing of the film back in January and she hopes to be able to get on the list of views. Dallinger said it is possible this would be a group event with surrounding colleges.

Education is an important part of this group and to Curley. She wants everyone to feel welcome to join the organization, even if they are not part of the Native American or Alaskan Indian communities. If people are attending the meetings, she is happy to educate.

“For her, a first-year student, it is just amazing that she is willing to do this. I think that it can be frightening at times in a culture that is so different,” Dallinger said.

One of the impactful things Curley has done, along with the help of Dallinger, is standing in front of SGA and advocating for the college to celebrate Indigenous People’s Day, rather than Columbus Day. This motion passed.

With Simpson’s troubled history involving race and Native American culture, this club is helping to bring light to important issues. Last semester, Curley spoke out when t-shirts began being printed with the old Simpson mascot and name on them.

When she saw students and members of the communities say they do not stand with these racist statements, Curley knew there were people who stood with her.

“This is a different setting here at Simpson than where she came from,” Dallinger said. “Coming here to this predominantly white campus was a big change and it took a little bit for Shaya to recognize that white people can be interested and willing to learn. I don’t know if she knew that when she first came and she was a little hesitant.”

Curley is proud of the work that she has done with this group and is excited to see where it will go in the future.

“It feels amazing,” Curley said. “This is what my ancestors fought for and if they saw me now they would be so proud of me.”

NAISA will hold its next meeting on March 4 in Fleming located in Kent.