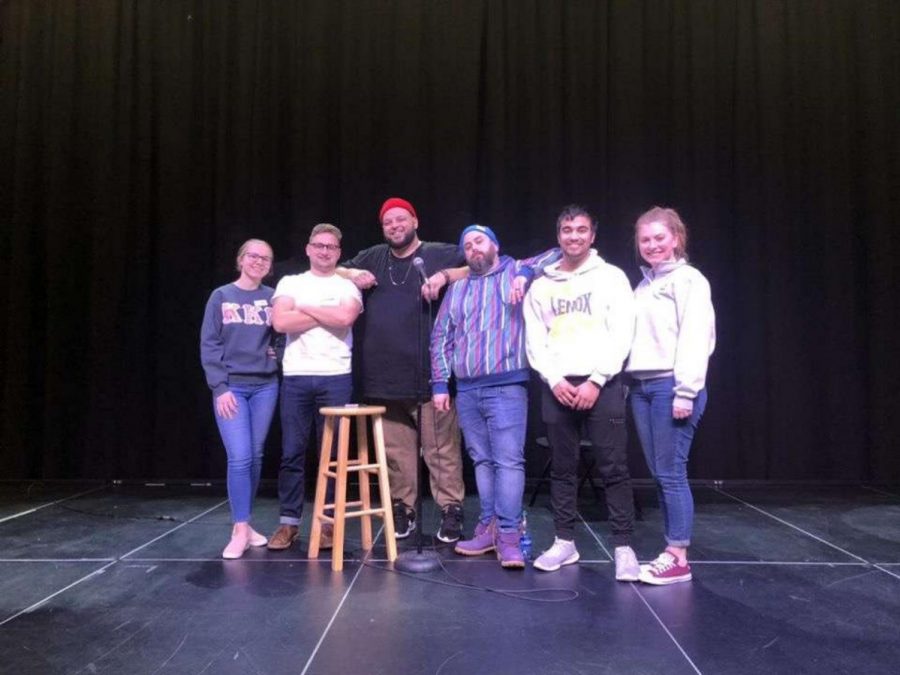 Emerging from a dark curtain at the back of the stage, Daniel Franzese made his entrance in Black Box Theatre on Wednesday, Feb. 20 to Christina Aguilera’s “Beautiful,” which he preceded to sing to an audience member who had been called on stage.

The audience member was brought on stage by Franzese’s opening act, a comedian who goes by the name David the Gay.

To kick off the show, David the Gay began by telling the audience a little bit about himself.

“I’m sure you can already tell from my hand gestures and my effeminate voice, I am in fact—diabetic,” David said to laughter.

“I have such a good time traveling the world with this person,” David said as he introduced Franzese. “He just brings so much light into my life and I can’t wait for him to do that for you.”

The “Mean Girls” actor came to Simpson College during his “Yass! You’re Amazing!” tour which he named that way because, “that’s all anyone says these days.”

Franzese’s Italian mother was frequently mentioned and impersonated during his show, often being the center of his jokes.

“I tried to get my mom to go see it,’” Franzese said. “She didn’t want to see it because she doesn’t like clowns who wear too much makeup. I’m like mom, you wear more makeup than Pennywise. Like, it is basically aunt Lisa with less vodka.”

Talking about his trip to Los Angeles with his mom, Franzese mentions when his mom saw Ryan Gosling in the car next to theirs.

“She screams, Ryan, do you know my son Danny? He was the fat gay guy off of Mean Girls, you guys should hook up,” Franzese said, impersonating his mom.

Franzese’s fears were another topic brought up throughout the show.

“I used to be afraid of wearing Yankees hats in New York City because people might talk to me about sports,” Franzese said. “Now I don’t care, if someone asks me if I’m a Yankees fan I just say no, I’m gay dude this is just fashion. My favorite team is ‘Cats.’”

Talking about what he is still scared of today, Franzese mentioned Pompeii.

“In 79 A.D., Mount Vesuvius erupted and covered everyone in ash and molten lava and they were frozen in exactly what they were doing at the time,” Franzese explained. “I think about this any time I’m doing something I don’t want to be frozen doing. Like when I’m stoned with a pint of Ben and Jerry’s on my belly watching Adventure Time.”

Another topic that was brought up by Franzese was animals who have sexually transmitted diseases.

“I found out that birds have syphilis, and they can give it humans,” Franzese said. “Imagine being the person who got syphilis from a bird and had to explain that to their boyfriend or girlfriend.”

Franzese wrapped up his show by allowing the audience to ask him questions in a segment he called A.M.A or Ask Me Anything. During this segment, it was revealed for the first time that Franzese will be a judge for season 12 of “RuPaul’s Drag Race” which would be revealed officially at noon the following day.