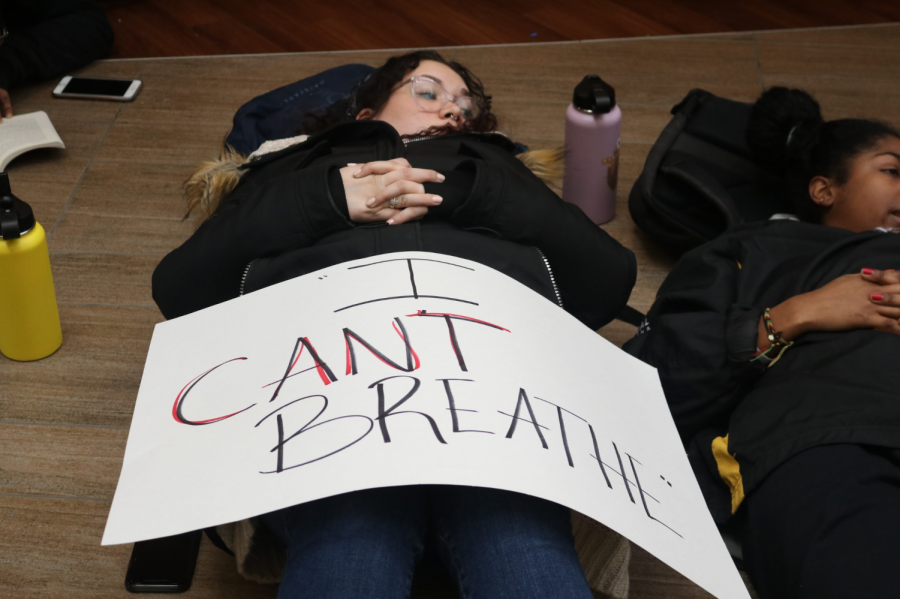 Black Student Union welcomed students to lay with them in Kent Campus Center to raise awareness for lives lost due to police brutality and racial discrimination. This is Black Student Union’s third time hosting the event.

“The way I see the die-in is a way for us to bring awareness to police brutality, but also to acknowledge, respect and grieve the lives that have been lost,” Vice President of Black Student Union Casie Redhage said. “I think it’s a way to start a conversation.”

Many students believe discrimination and police brutality are major issues in society today. They also believe the issue doesn’t get enough attention.

“Police brutality is something that is very prevalent in African American communities, it gets overshadowed a lot, especially the women who have been affected by police brutality,” sophomore, and risk management chair for Black Student Union, Tatum Clayburn said. “This is to bring attention that this is still happening. Racism hasn’t gone away; it never will go away unless we do something to fight this.”

During the Die-In, students lay on the ground in silence and reflect on events involving discrimination and police brutality. It’s also a time for students to have conversations and talk about these events with each other.

“It does feel uncomfortable laying on the ground, but it does represent the countless bodies that have been on the ground like Trayvon Martin and all the other names we hear throughout the news,” Enrique Idehen said. “It is a problem still. Systemic racism is also a problem. It’s about how police brutality has affected communities.”

Redhage and Idehen were among other students laying down for the same cause. Some students have personal reasons for participating in the Die-In, including Clayburn.

“My uncle Tony was shot and killed by police, he was a Vietnam veteran and he served his community very well,” Clayburn said

The Die-In is also a way to bring awareness to Simpson students specifically, which is something Redhage believes they lack. Getting people to talk about these racial issues, even when they don’t affect you, is a goal of this event.

“I think the majority of the students here would rather just see we’re doing it and then look away rather than read what the posters say, start a conversation, or even come join us,” Redhage said. “I think that’s difficult because it is a big deal that we’re doing this. For people to look our direction and just walk away and not care is hard, but I think it will spark an interest in some people to actually pay attention to what goes on in the black community and in the world.”

As Black History Month continues, members of the Black Student Union hope that Simpson students will continue to stay engaged and learn the history and current issues. Black Student Union will continue to host events in celebration of Black History month and the student body is welcome to attend. Their next big event is a ‘90s themed party in Black Box on Feb. 28 from 8 p.m. to 12 a.m.