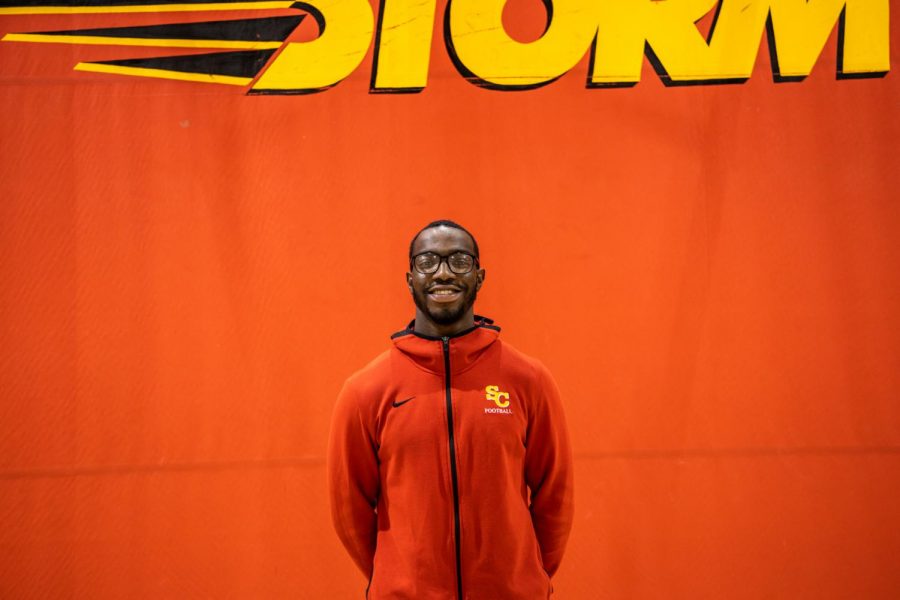 For some student-athletes, an ACL tear can be career-ending.

Not for senior track and field athlete Sam Adeniyi.

After fully tearing his ACL during football practice in September of his junior year, Adeniyi dedicated his time to rehabilitation to prep for his much-anticipated track and field season.

But his healing process wasn’t without frustration.

“I originally told myself if I ever tore my ACL I would be done,” Adeniyi admitted. “I actually applied to graduate early because I wanted to be done. After the surgery, my legs hurt all the time and it was so hard to move around and get places. I was pretty angry and wondered why this had to happen to me.”

This frustration dissipated after gaining encouragement from his friends and coaches.

“Four months into rehab I started hanging around my track teammates again,” Adeniyi said. “Coach Cleveland confronted me about graduating early and told me to give it time, work hard and come back better than ever.”

That’s exactly what Adeniyi did.

“I started hitting rehab really hard, working with the athletic trainers on campus, improving my mindset and making the most of it all,” Adeniyi said. “Over the summer I got to rehab at Training HAUS back home in Minnesota, which is the official rehab facility for the Minnesota Vikings—without that top-of-the-line help I don’t think I would have recovered as strongly.”

Aside from a couple of hamstring pulls, Adeniyi has since felt strong, healthy and prepared to take on his senior season.

Adeniyi’s performance in the Wartburg Invitational last Saturday landed him the American Rivers Conference Track and Field Performer of the Week award.

“It was actually my first heptathlon back from my ACL injury,” Adeniyi said. “Going into it I was very excited, and though I wanted a better score, I’m still happy with how I did. I was nervous about the long jump, but I ended up PR-ing in that event, which really helped my confidence for the remainder of the events.”

“I was pretty excited to see the point total,” Adeniyi said. “I had aimed for more points, and I knew I was off that mark but I was still happy to finish first.”

In addition to placing first, this was also Adeniyi’s first conference weekly honor.

“I did not expect to get ARC Athlete of the Week whatsoever,” said Adeniyi with a chuckle. “Still, it was so nice to be recognized for my hard work and it made me feel really good about my progress.”

He is now officially leading the Storm in the high jump, long jump, pole vault, and 60-meter hurdles.

As a leader both statistically and figuratively, Adeniyi has some goals he hopes to achieve both individually and as a team.

“I’m really pushing myself to make nationals this year for both indoor and outdoor seasons,” Adeniyi said. “As for the team, I think we have really good chemistry this year and I’d really like to see our 4×4 be national qualifiers. We have a small team so we have to stretch people where we can, but there are a few standout individuals who I’m confident will be successful this season and even qualify for nationals.”

Adeniyi and the Simpson track and field team will compete in the Dubuque Invitational this Friday, Feb. 21 at 2 p.m.