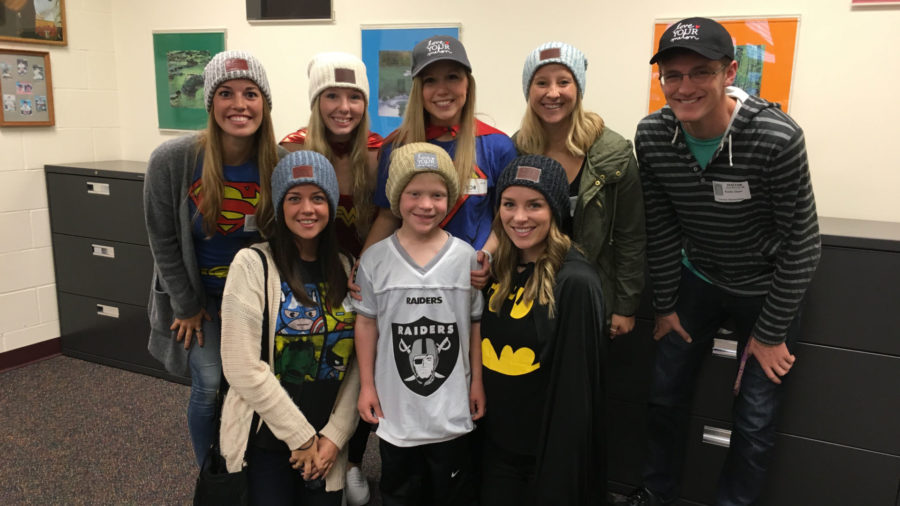 by Maddie Muhlenbruck, Special to The Simpsonian

Love Your Melon beanies and apparel are everywhere. It might be the cold, but it’s more likely the cause.

Whether they are keeping noggins warm around campus or on your favorite celebrity’s social media page, you can’t miss the famous leather patch.

The Simpson Love Your Melon Crew has participated in multiple outreach projects to spread the word about LYM’s mission. The crew formed in September of 2015, and efforts from the first semester focused on raising awareness of what the LYM mission was all about.

“Our crew members have done such an amazing job of reaching out to the community and utilizing social media to spread the mission of Love Your Melon,” crew captain Aimee Loats said. “Once it became something people saw us wearing, it kind of took off and became a trend. The Simpson community supported us from the first day and we could not be more thankful.”

You might have seen the crew at the Holiday Extravaganza on the square, the Des Moines Marathon or on campus spreading the word. They have started a movement within the Simpson and Love Your Melon community.

Love Your Melon isn’t just a college trend but has spread around the country.

Every month, crews are challenged by Love Your Melon founders, Brian Keller and Zach Quinn, with a new method of spreading the word.

Near the end of 2015, they challenged each crew to reach out to their favorite celebrities to support the cause and cover their melons with hats, leading to a wave of LYM mayhem across social media outlets everywhere.

Crews contacted hundreds of celebrities around the country and provided them with beanies to post on social media. The awareness level was rising, and so were sales.

Simpson College crew members were in contact many celebrities, including actor Rob Riggle. He has starred in “21 Jump Street,” “Saturday Night Live” and many other popular movies. They also sent beanies to 3OH!3, a popular American electric duo.

Around the country, campus crews sent beanies to Justin Bieber, power couple Mila Kunis and Ashton Kutcher, and the entire cast of “Grey’s Anatomy.” Even the Instagram-famous dog, Jiff Pom, promoted LYM’s cause.

“We have received the recognition from communities, states, celebrities, magazines and many more. The awareness of LYM is so high that we cannot stop now,” Loats said. “We must work until we see a cure for childhood cancer.”

The billions of social media users who gained awareness from celebrities during that challenge led LYM to reach their ultimate goal of the million dollar mission.

LYM’s goal in 2015 was to donate $1 million dollars to childhood cancer research by selling beanies and making children cancer patients smile along the way.

As of Dec. 31, 2015, product sales allowed LYM to reach the goal right before the clock struck midnight.

The funds were equally divided and given to CureSearch for Children’s Cancer and the Pinky Swear Foundation to fund cancer research initiatives and provide immediate support for families who have children battling cancer.

But the work doesn’t stop after one goal.

Simpson’s crew is staying busy this semester with two upcoming visits with children battling cancer in the Des Moines area, events around campus, an Iowa Energy game and another hospital visit.

“Our goals this semester are to continue donating hats all around the area, collaborate with more organizations on and off campus, meet some amazing people along the way and, most importantly, make children smile,” Loats said.

To buy a beanie and support the Love Your Melon mission, go to loveyourmelon.com. At checkout, please select Simpson College Campus Crew so they can continue to donate hats to children locally.