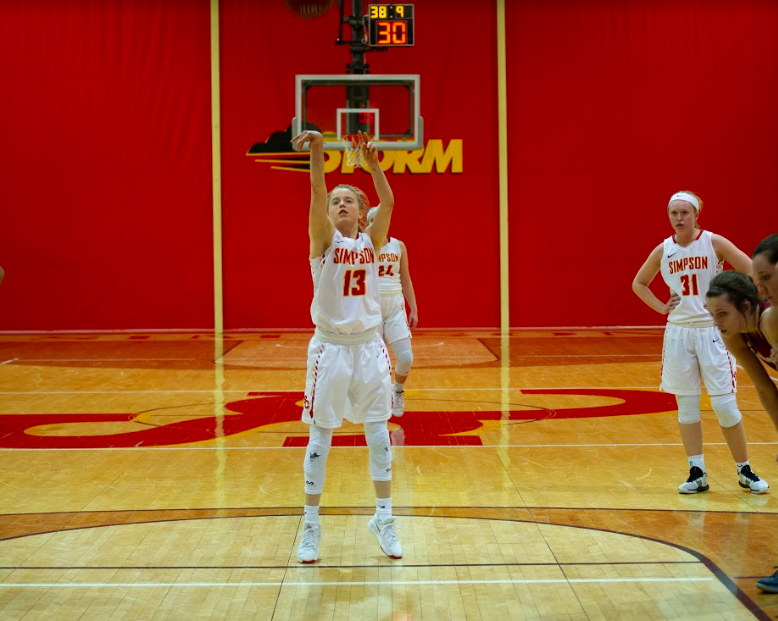 Simpson women’s basketball took the lead in the third quarter, but couldn’t hold on against Coe and fell at home 84-75 on Feb. 12.

Simpson took the lead 51-50 with a 3-pointer from Kia Rasmussen with 4:25 left in the third quarter. Coe quickly took back the lead for the rest of the game.

Coe’s Jackie Feldt and Madeline Wilkins each had 26 for a combined 52 of the team’s 84 points.

“Our goals were we wanted to stop 13 [Feldt] and 21 [Wilkins],” said head coach Brian Niemuth. “Number 21 is a really good three-point shooter and our goal was not to let her have any open threes. Well, we kept losing her. She was 8-11 on the three-point line so we obviously didn’t do a very good job of identifying where she was.”

Simpson played press defense throughout the game and was able to create 23 turnovers, but Coe shot 56.9 percent from the field and 52.2 percent from behind the arc.

Niemuth shared his thoughts on tough points in the game.

“Thirteen is just a really good player,” Niemuth said. “We had a hard time guarding her at the high post. We’ll have to make some adjustments on those two if we play them again in the tournament which it kind of looks like we will.”

Simpson capitalized on a total of 30 points off of turnovers as well as 20 fastbreak points.

“A 1:1 ratio is what you want,” said Niemuth. “If you have 23 turnovers, you want 23 points off of those turnovers. We did a good job of converting those turnovers into points.”

Simpson was led by Kia Rasmussen, who had 21 points. Jenna Taylor and Cassie Nash had 16 and 14 points, respectively.

Although Simpson caused turnovers, they also gave the ball away.

“The problem that we had was I thought that ourselves that we didn’t take care of the ball,” Nieman said. “We had 15 turnovers and they weren’t even pressing.”

Simpson returns to action at Wartburg on Saturday, Feb. 15. Tipoff is set for 2 p.m.