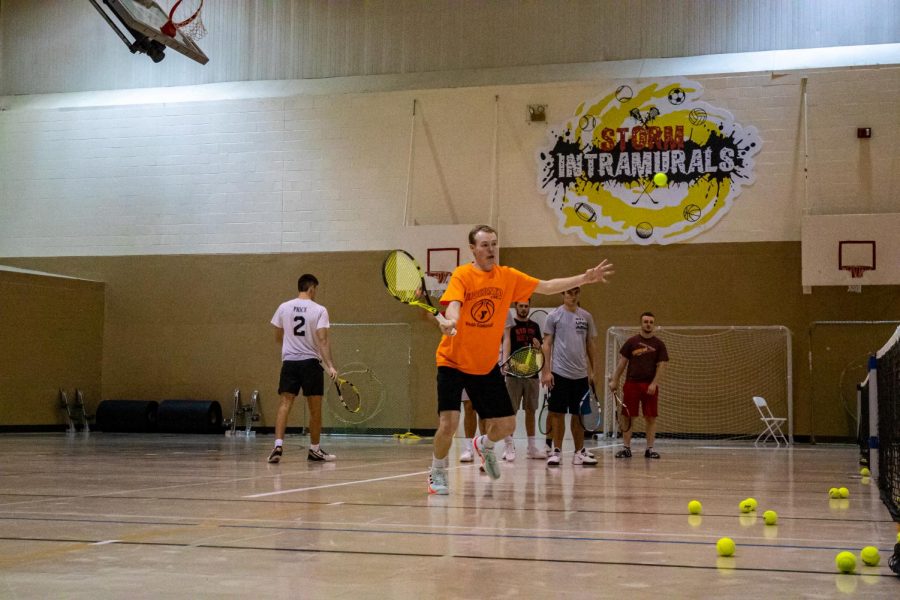 Head coach Matt Price is confident that Simpson’s tennis team is going to have a successful season.

The Simpson College men’s tennis team started their season with a victory at St. Ambrose Feb. 1.

“We’re excited because we have some experience, but we also have some youth now,” Price said. “It’s great to have our top guys be upperclassmen, but it’s nice to have some younger guys playing in varsity matches.”

Athletes who compete in the American Rivers Conference are met with heavy competition. The case is no different in men’s tennis. Coach Price’s group is ready for the tough task ahead.

“The competition is going to be tough, especially in the conference, but these guys have improved since the fall season,” Price said. “That improvement showed last weekend.”

The team opened up the spring season with a 7-2 conference win at St. Ambrose. No. 1, Reade Reiter started with a singles win after taking the first game 6-4 and the second game 6-1. No. 2, Brett Dewerff took the second round of singles after winning the third game in a 13-11 thriller.

When it comes to important things for the team to focus on for the rest of the season, Coach Price has three pieces of advice for his group.

“The first thing I tell them every day is, I tell them to have fun,” Price said. “Number two, if you compete hard, give it your best, those results will come. The other thing I tell them is consistency. I’d rather see a guy be consistent and do it right than be out of place and banging the ball off the wall.”

The senior leadership is something that Price says is their strong point going forward this year.

“I have three great seniors on the team this year,” Price said. “They have stuck with it since my first year here. They lead by example. They tell the other guys to work hard and also have fun. The one thing I very much appreciate is their demeanor on the court.”

The Storm brought in five freshmen this year. Coach Price is excited to see how they develop and grow this year as well as years to come.

“I tell all the freshmen that they’re going to go through ups and downs, but if they give me 100 percent in practice and meets, they will see themselves get better,” Price said. “It takes patience and it isn’t all going to come at once, but looking at how the upperclassmen conduct themselves and working hard in the off-season, the results will come.”

Senior Brett Dewerff is excited to improve on last year’s mark and continue to move towards their goal.

“I’m excited for our newcomers on the team. Having a bigger team ramps up the competition in practice,” Dewerff said. “That is going to help us take the next step towards our goal of qualifying for the conference tournament.”

Getting a win early in the season is a confidence boost for the team, but Dewerff and his team understand what they have to do going forward.

“To attain our goals, the biggest thing for our team to do this year is to believe that we can compete with and beat any opponent we face,” Dewerff said. “We need to be positive and go into every meet with the same amount of confidence as we did on our first win.”

The Storm will look to be victorious again as they travel to Cedar Rapids to take on Coe and Wheaton on Saturday, Feb. 15 at noon.