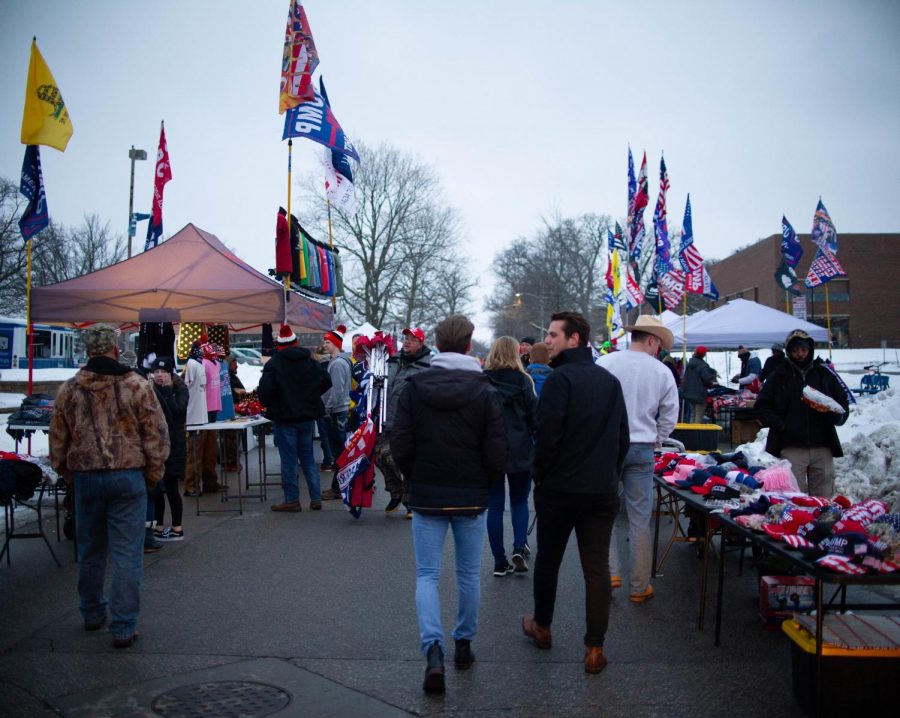 President Donald J. Trump held a rally at Drake University on Jan. 30, only four days before the Iowa caucuses.

Despite the cold, 28-degree weather, Trump supporters began lining up for the rally as early as Jan. 28.

More than 400 people were turned away when Knapp Center reached its capacity of 7,152. Those who decided to brave the cold were able to watch the rally from outside the building.

President Trump was welcomed with a standing ovation and applause as “God Bless the U.S.A” was played.

He began by predicting the outcome of the upcoming 2020 Iowa caucuses.

“We’re going to win the great state of Iowa, and it’s going to be a historic landslide,” Trump said. “And if we don’t win, your farms are going to hell, I can tell you right now.”

President Trump spoke about his 25 percent tariff increase on U.S. exports to China and their agreement to purchase up to $50 billion in American farm goods.

“Weeks ago, we signed a terrific new trade agreement with China that will boost American agriculture by $50 billion every year, and many other businesses like manufacturing, banking, finance. Overall $250 billion,” he said.

President Trump emphasized the importance of American-made products, even from the heartland.

“We’re fighting for products made in America and grown right here in this great, great state of Iowa,” he said.

He also commented on the recent coronavirus outbreak, and his plan to work with China and other countries so it does not get “out of hand.”

Supporters were not the only ones present at this rally. Protesters also gathered outside of Knapp Center as President Trump spoke.

Simpson students were among those who endured the harsh weather to watch from afar. Junior Nick Mattly and sophomore Jarod Riordan were two of those students.

Riordan said he was surprised by the number of people that were present. He and a group of Simpson students showed up two hours early, but by then the doors had already been blocked off.

He said that although their toes went numb from the cold, it was still a worthwhile experience.

“For me, it was fun just because all the people around him [President Trump] were so supportive. It was also fun because it was something I had never experienced before,” Riordan said.

This was also Mattly’s first time at a political rally.

“All that energy there was unreal,” Mattly said. “I would do it again for sure. It was one of the best political experiences I’ve ever had. I’d never been to a rally before, so I really liked it.”