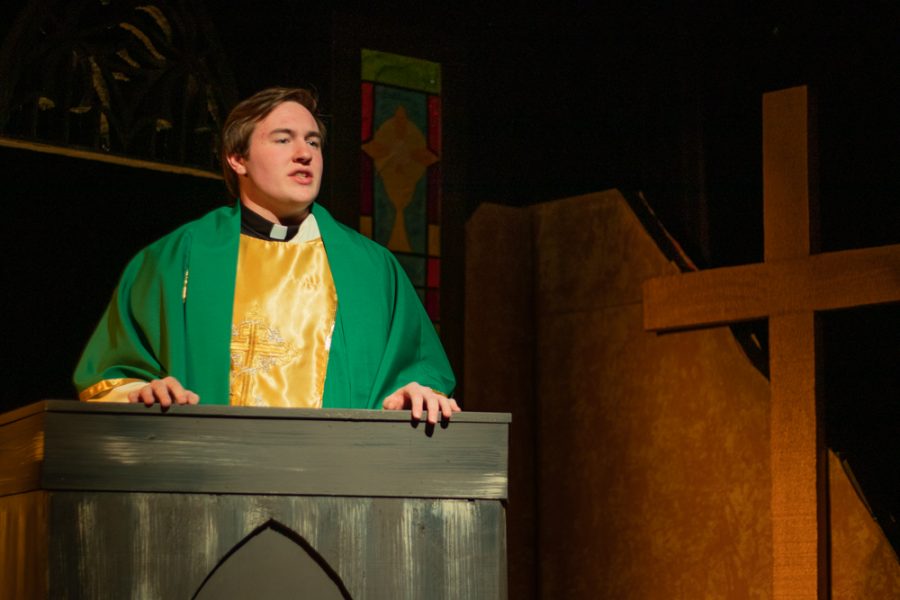 At the end of this week, students from Simpson Productions are putting on the first play of 2020. The show Doubt, a Parable is set in the 1960s and challenges us as it searches for difficult answers within the Catholic Church scandal.

Sister James, a young nun teaching at a Catholic school in the 1960s, approaches Sister Aloysius, the school principal, about the relationship between one of her male students and the Priest, Father Flynn. Although the evidence is circumstantial, Sister Aloysius suspects Father Flynn of seducing the young boy. Using her years of experience and strong intuition, Sister Aloysius begins investigating the priest while Sister James voices doubt that there was any relation at all.

“I think that this is one of the easiest shows to follow and is truly engaging,” said junior sound engineer, and scene shop undergraduate assistant, Maslin Boten.

Students and faculty have been committed to working on this production for close to a month.

“So Monday through Thursday, I’m pretty much here about, on average, nine in the morning until nine at night,” said Director and Professor Mimi Kammer.

For students involved, it’s a great opportunity to explore theater further and step out of their comfort zones.

”It’s a lot of good first opportunities for people. And it looks like they’ve been doing this for years. It looks like they are very experienced and it’s a really great production,” Boten said.

The play is also fully student-designed so not only do students get to be directly involved in the play, they get to go behind the scenes. For most students, that does not come in an undergraduate program.

“Come see it, it’s a drama, but it also has comedy,” Kammer said. “It moves along really well and it ties into current events, really close to what’s going on today.”

Performances are on Thursday, Friday, and Saturday at 7:30 p.m. and on Sunday at 2:00 p.m in the Blank Performing Arts Center Barnum Theater. Each performance is 90 minutes.

Simpson faculty, staff, and students all get in for free.

The next Simpson Productions event will be The Pirates of Penzance starting on March 6.