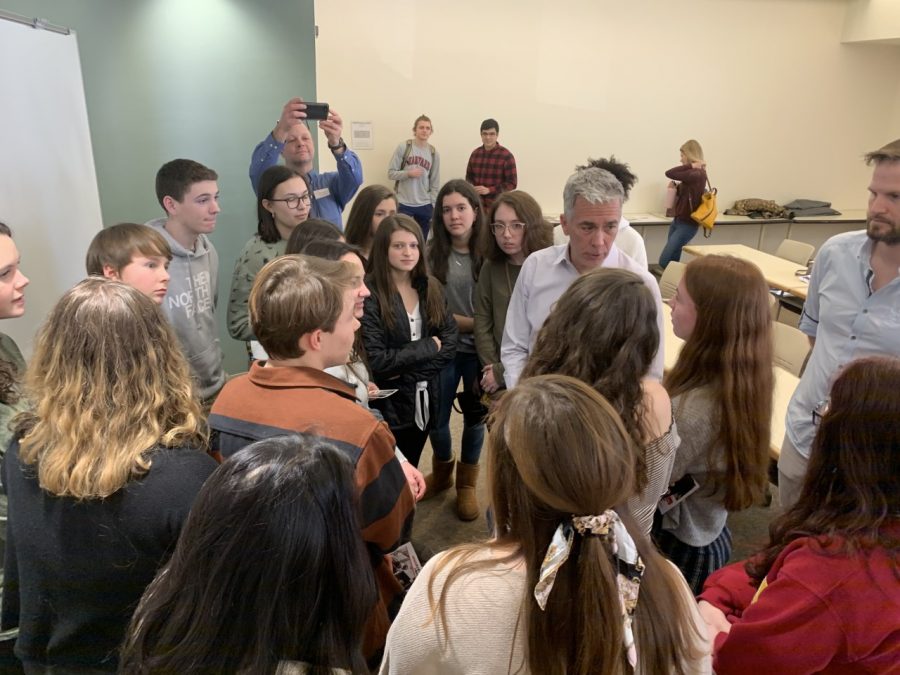 Joe Walsh speaks to students after his event. /photo by Gunnar Davis

Around 50 members of the Indianola and Simpson communities sat in Pioneer Hall in McNeil today to hear Republican presidential candidate Joe Walsh speak.

“I love small liberal arts schools,” Walsh said. “Republicans gotta go where Republicans typically don’t go. We’re losing young people by the thousands. We need to talk to young people and that’s why I love to speak at colleges.”

Walsh spoke for ten minutes about his disdain for Trump and why he chose to run against him in the election.

“You better have a really good reason to take on a guy like Donald Trump,” Walsh said. “I want to tell you why I’m doing it. When I say Trump’s unfit, here’s what I mean. Almost every time Donald Trump opens his mouth, he tells a lie.”

Walsh spoke openly about all of the reasons he thinks Trump is not the right man for the job and how he is destroying young people and the Republican party.

Walsh then opened his talk up and took questions from the crowd for the remainder of his time. He spoke about ways that Republicans can gain trust from young people, people of color and women. He also spoke about the importance of climate change, legal immigration and the second amendment.

“It’s every bit as important as the first amendment, I’m a big second amendment guy,” Walsh said. “I believe I have a God-given right wherever I carry a gun to protect myself, my family and my property.”

Many of Walsh’s answers to questions started with the removal of Donald Trump from office. First-year Drake Wood thinks he doesn’t have a shot to do that, but appreciated hearing his perspective.