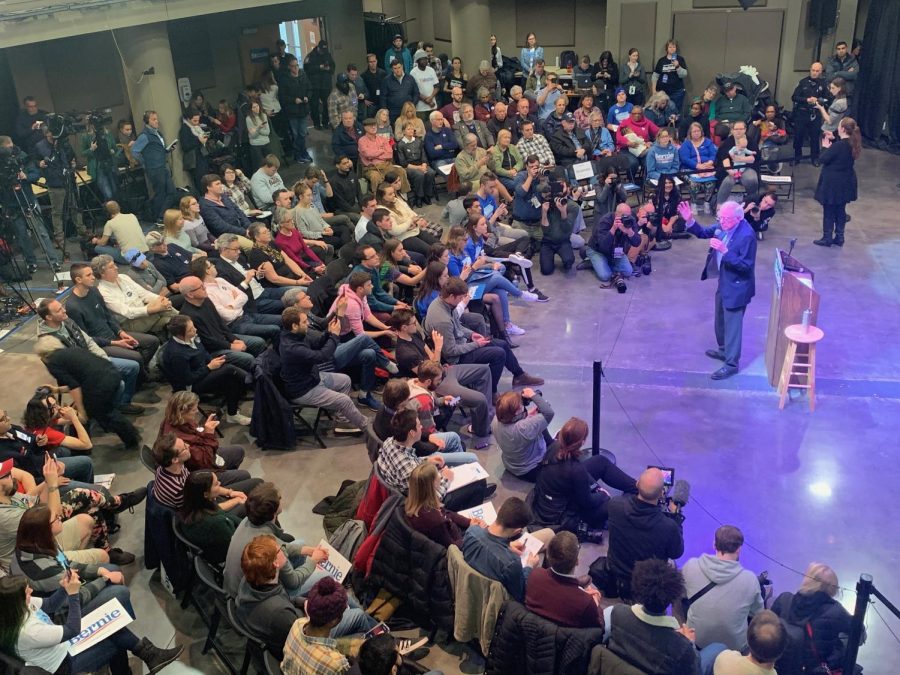 Introduced by Simpson for Bernie Student Organizer Nicole Baxter, Jayapal kicked off the rally by discussing how she feels that Sanders is a steadfast and consistent politician.

Omar followed Jaypal’s speech by discussing Sanders’ plans to pay for Medicare for All.

“I believe, like Bernie, our foreign policy is domestic policy,” Omar said. “We currently spend $700 billion in funding endless wars — Let’s just take $20 billion of that money. We could provide healthcare for every single uninsured American.”

After a brief introduction by his wife, Sen.Sanders spoke to the crowd of over 500 about issues such as immigration, healthcare, student debt, beating Donald Trump and ensuring the financial safety of the working class.

“Almost all new income and wealth goes to the top percent,” Sanders said. “So here’s a radical idea, what about having a government and an economy that works for the working people?”

Out of the Simpson students who attended, this upcoming caucus serves as their first.

Sophomore Daniel Enger is ready for his first caucus and is planning on caucusing for Sanders.

“Bernie’s the only honest politician in our current race,” Enger said.  “He’s been talking about the same issues for the past 30 years so I think that really gives him credence to what he’s saying and I really just support him on every issue.”

On the other hand, sophomore Jessica Cousins isn’t too sure who to caucus for, she’s caught between the two candidates.

“I’m caught between Sanders and Warren,” Cousins said. “I like what they have to say about healthcare and climate change those are two issues that I care about.

This election has served as a learning process for Cousins so far. She’s learning more about herself and what she believes in.

“I’m deconstructing what I think and know,” Cousins said. “Because growing up democratic socialism and liberalism were dirty words so I’m going through a deconstruction process and learning for myself what these words mean and if they align with my views.”

Outside of Simpson, some attendees have traveled far and wide to experience the Iowa caucuses.

Mariah Lattas is visiting Simpson college with the group from students from Australia.

“It’s been so great to see so many candidates and experience so many political perspectives. This was our third or fourth candidate by now,” Lattas said.

As for which candidate she prefers, Lattas and the other Australians don’t have a preference.

“We’re completely apolitical,” she said. “I just love to see anyone and hear anyone and experience everyone. You guys do it so different compared to us. This is a lot more personal election. Getting to listen to candidates and hear from them is very very different.”

Meanwhile, Heather Macleish came all the way from Massachusetts to witness the caucuses.

“I’m with a tour group, so we’re tourists checking out all the candidates,” Macleish. “So far, we’ve only seen Bernie, so we’re going to Yang tonight, then Klobuchar and Warren.”

“I came here more of a Warren fan,” she said. “But I want to be open-minded and really listen. I don’t vote for a while so I have a long time to think about it.”