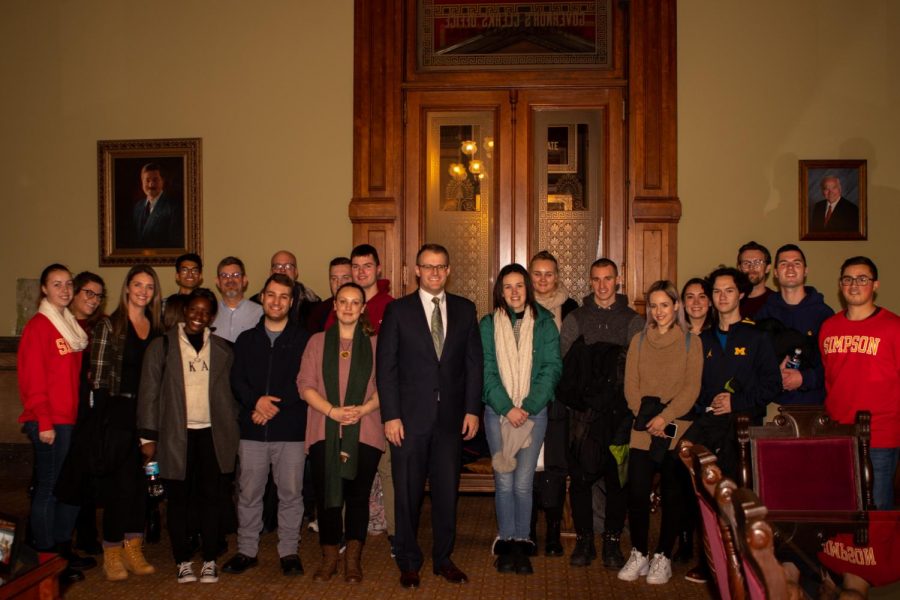 With freezing cold temperatures and heavy snowfall, most don’t consider Iowa a traveler’s dream. But don’t tell that to the nearly 40 Australian students at Simpson College.

The students from the University of Adelaide, who are here to study the Iowa caucuses, are loving every moment of it.

“Me personally, I’ve never seen snow before,” Laura Costanzo said. “I know a lot of people on the tour are the same. It’s kind of that thing where the first time it snows, we’re all acting like five-year-olds. Like, this is the most amazing thing we’ve ever seen. The fact that there’s snow, and I guess that novelty of it, is making the cold a lot more bearable.”

Although snow is an added positive, the students are staying at Simpson College for just under three weeks to study American politics in Iowa — something that is very different from back home.

“I didn’t realize how significant it is, and how people, on the coldest nights, will still go out to rallies and still scream to ask a question, or get a photo, or listen,” Mariah Lattas said.

Lattas says in Australia, citizens are allowed to choose a party and not a specific candidate. She stressed it is one of the biggest differences about politics in the United States compared to Australia.

“You have the beauty of being able to select the candidate, rather than the party and such, which we don’t have back home,” Lattas said.

Candidates going out into the public and holding events where their voters can meet them is a new concept to the students as well.

With the caucuses finally arriving this coming Monday, the students are looking forward to seeing the end of the ride.

“I think because we’ve only been here, it’ll be two-and-a-bit weeks since we’ve been here once we get to the caucus, but we’ve had an intense focus on the caucus. I think the big crescendo at the end is just going to be amazing,” Kian Rafie said.

One thing the students really love is the campus and community life. They’ve participated in intramurals, getting food on campus and living in close quarters. These are all different from universities back home.

“Back in Australia, we all have to travel a reasonable distance to get to university, and the amount of hanging out and doing community inspired events,” Isaac Jansons said. “We’ve been to basketball games, we’ve participated in dodgeball. In Australia, that just wouldn’t happen without weeks worth of preparation and everyone agreeing where to be.”

The love for the small college feel is something all of the group can agree on.

“Your university is part of your identity,” Lewis Semmens said. “Where in Australia, it’s just an institution that we go to.”

Still, having a snowball fight for the first time in their lives might take the cake.

“The gimmick of throwing a snowball is something I’ve wanted to do since I was a child,” Rafie said. “This is the first time I’ve seen snow.”

All of the students wanted to take time to thank Simpson College and the leaders who helped set up the trip. Among those are Jay Wilkinson, Tom Buchanan, Seth Anderson and Kedron Bardwell.

“They’ve went straight out of their way to make sure we felt like we were at home,” Lattas said. “I know that the next five days are going to be just as wild as the previous.”

The students will take off and head back home on Tuesday, the day after the caucuses.