Pete Buttigieg arrives in Indianola ahead of the Iowa caucuses 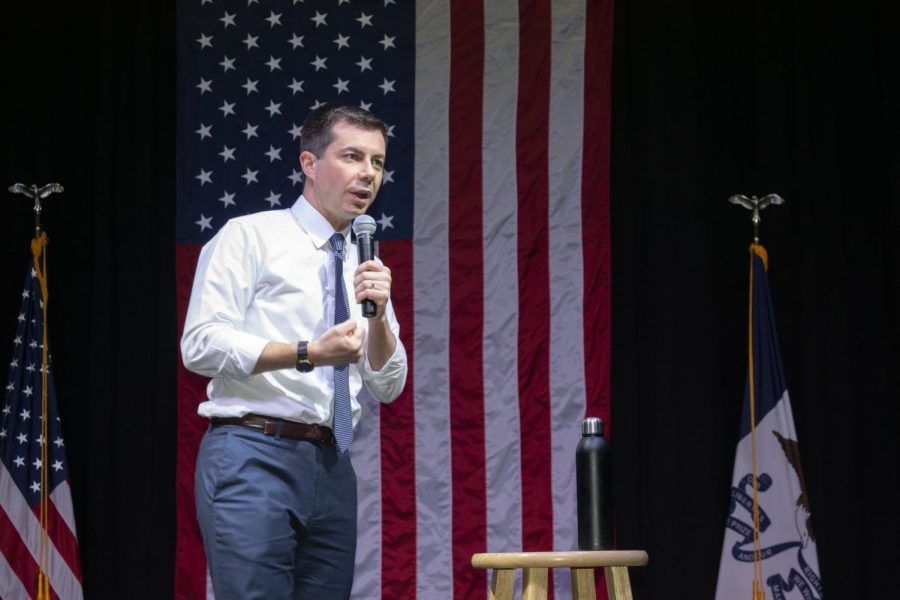 Pete Buttigieg visited Simpson College on Jan. 28 at 2:50 p.m. in Black Box Theatre in a final effort to rally support before the Iowa caucuses.

Attendants were given a brief introduction from Simpson College junior and Pete Buttigieg campaign organizer Jordan Baldwin, who encouraged his fellow college students to caucus for Buttigieg.

After thanking his campaign’s volunteers and organizers, Buttigieg began outlining his policies for a crowd of about 425.

He feels that our country must bring solutions to Washington instead of policies and solutions flowing from Washington, noting that a bigger majority of the American public agrees what we are for rather than what we are against. He wants us to imagine “waking up in the morning without Trump as president”.

He urges people must put away the idea that you must choose between unity and boldness in order to heal our country.

Buttigieg hit on a number of his policy plans, including one of his most well-known: his position on climate change.

Buttigieg views climate change as one of the biggest security threats to our era. As president, he aspires to make America carbon neutral by 2050. He also plans to boost funding for clean energy research and development as well as fostering international cooperation for global climate diplomacy.

Buttigieg visited another increasingly prominent issue within our country: mental illness and addiction. He feels America needs a president who will “break the silence” and understand that it is ‘OK’ to talk about this issue. He promises that if elected, he will fill this role.

Buttigieg plans to improve access to resources by integrating mental health professionals in physical health care systems and schools and requiring all schools to teach Mental Health First Aid courses. He will also reimburse these specialists so more people are motivated to go into the field.

A big part of improving access to any form of health care is affordability. Buttigieg has a plan for that as well. He is pushing his plan  “Medicare for All Who Want It” to ensure there is no such thing as an uninsured America while maintaining one’s right to choose.

Buttigieg acknowledged it was time to raise the minimum wage to give the American people a better chance to live. Making a mention to the Dow Jones Industrial Average looking good is only beneficial to those with their names on the side of a building leaving families wondering when that rise in the economy is going to affect them.

Pete Buttigieg urges Americans to vote for a president who will unify the country and turns to the people to do so.

“In 2016, the democratic party became stuck between two options: Hillary, or Bernie,” Baldwin said. “What makes this election cycle different is that we have so many candidates that are all fundamentally similar to one another that it is hard to choose one.”

Baldwin emphasized how important Iowa was during the caucus season.

“We, as Iowans, have an important role to play in deciding who the next president of the United States is going to be,” Baldwin said. “We narrow down which candidate best represent the mixed landscape of America.”

“Going to different rallies really helps focus on policies rather than how the candidate is known by the public through the media,” Sagastizado said.

“I think that him coming to campus opens up the opportunity to learn more deeply on him as a candidate and the process of caucusing,” Henry added. “It was a very strategic move for Pete to come to campus with only six days left before the Iowa Caucuses.”

You can learn more about Buttigieg and his policies by visiting his official campaign website.