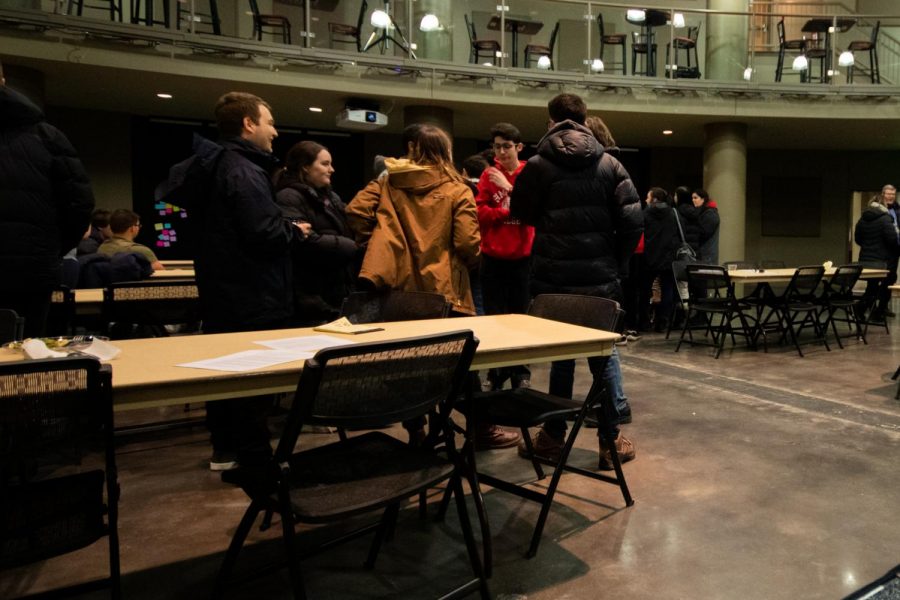 Students from Simpson College and visiting students from the University of Adelaide, participated Tuesday in a policy hackathon in Black Box to find solutions to current political issues.

The event—which is in its first year at Simpson—lasted approximately three hours, with each of the five groups working to find solutions to their chosen policies: technology in manufacturing, college affordability, healthcare, climate change and corporatism versus populism.

One of the students, Alexandra Betheras, a fifth-year at the University of Adelaide, worked with a group on issues facing the aging population and healthcare system.

“I wasn’t really sure what we were doing before [the hackathon],” Betheras said. “But I’m really glad I came. It was nice to just sit and talk about things, and to find—maybe not a solution—but a way forward. I thought it was really good.”

For Betheras, examining the differences between countries, such as America and Australia, was an interesting aspect of the hackathon. But the event was not without its challenges either.

“I think whenever we need to find a solution to something, that’s pretty stressful because there’s so much to do,” she said. “And sometimes it’s a bit overwhelming. But it also wasn’t too stressful because it was a nice, friendly environment.”

Overall, according to Betheras, the policy hackathon was a good exercise in civil communication, especially when it comes to politics and general problem-solving.

“I think we need to do more of this sort of thing,” she said. “More discussions with people who might not necessarily all agree or be on the same page—to talk about things and to have an actual conversation. I think it’s a more productive way.”

One Simpson College student, senior Levi Lefebure, knew the University of Adelaide students would be at the hackathon and was interested in hearing their perspective on American public policy issues.

“Getting that diverse point of view on these topics and hearing that people half-way around the world have a lot of the same ideas and a lot of the same problems being faced as us—it was pretty neat,” Lefebure said.

According to Lefebure, despite the posters advertising the event, more University of Adelaide students attended the policy hackathon than Simpson College students. All the same, he felt the experience would be worthwhile across the American education system.

“I think it’s a good exercise of critical thinking that could really be beneficial to students,” Lefebure said. “Maybe if it was held in U.S. high schools, we would see a higher turnout. It was kind of disappointing to see how so few American students came, personally.”