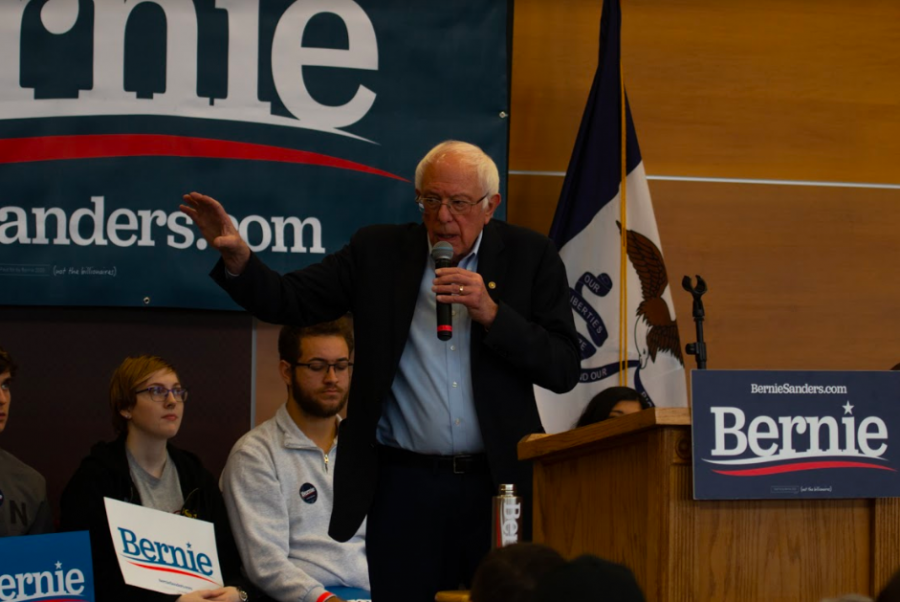 In the first hour, Sanders spoke about addressing the impact of money in politics. He expressed concerns about corruption in the election process, including voter suppression, the influence of super PACs and the effects of the 2010 U.S. Supreme Court decision on “Citizens United v. Federal Election Commission”.

“You have a handful of billionaires,” Sanders said, “Who are literally spending hundreds of millions of dollars electing candidates who represent the wealthy and the powerful. And that concerns me very much, because that whole process undermines American democracy. Which is why you end up in Congress with Republican leadership talking about tax breaks for billionaires and cuts to social security, Medicare and Medicaid.”

Sanders also spoke about the state of healthcare and insurance in America, including a move toward Medicare for All through a single pay program. He plans on eliminating administrative bureaucracy in insurance, taking on the pharmaceutical industry in drug pricing and eliminating premiums, copayments and deductibles.

The second hour saw input from audience members about ways to address climate change, describing personal experiences with the American healthcare system and raising concerns about the price of education and whether students are adequately prepared for college.

Additionally, a boy from the audience expressed concern about the correlation between dropping out of school and the prison system. Sanders responded by speaking about discrimination in the legal system, ending cash bail and legalizing marijuana.

“When we talk about an agenda that works for working class people, which is what our campaign is about,” Sanders said. “It means we must bring fundamental reform to a broken and racist criminal justice system. What it means is first, we should be investing in our young people, in education and job training, rather than building more jails and having more incarceration.”

First-year Payton Harris was one of the nearly 300 people in the audience. She came at the insistence of her best friend and out of interest in Sanders’ platform. Harris followed Sanders’ campaign throughout the 2016 presidential election and became interested when she heard about his current campaign.

Harris still hopes to hear from Sanders about his plans for gun control, noting that students should attend political events on campus like town halls to get involved in the political process.

“We’re the future of America,” Harris said, “And it’s really important that everyone gets out there and votes. We do impact it, and it’s kind of hard to be involved if you’re just not coming to anything. So, it’s an easy way to see what the candidates are for and what they plan to do in the future.”

Before the event officially began, the audience heard from three speakers, including first-year Eli Newson, founder of Simpson Students for Bernie Sanders. They spoke to the audience about their background, how it informs their political stance and urged the audience to support the Sanders campaign.

“I think one of the other speakers said it really well, the nurse that came and spoke. She said, ‘We don’t agree with Bernie Sanders’ issues. Bernie Sanders agrees with our issues, and he fights for us.’ That’s what matters to me,” Newson said. “He cares about the things that matter, and he’s not going to be owned and held accountable to these large corporations that control all his donations. He’s accountable to us.”

Simpson Students for Bernie Sanders is planning to get students involved in the upcoming caucuses, which are happening Feb. 3, 2020 at 6:30 p.m.