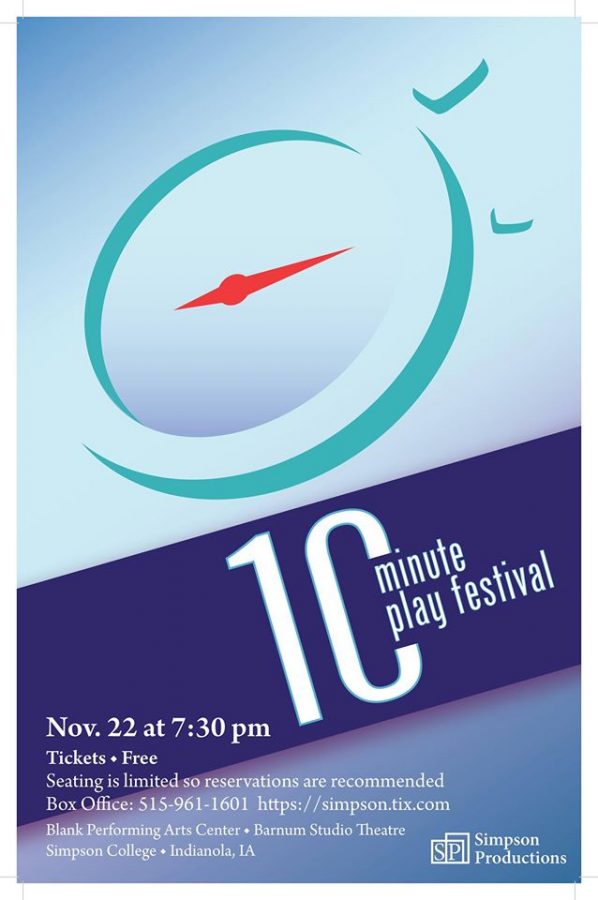 Photo submitted to the Simpsonain

Ten directors displayed their work as part of the Directing II course, led by professor Jennifer Nostrala, with a vast combination of themes and topics in each play. Small, dynamic casts and quickly changing sets brought an element of variety to the performances. The small space of Barnum Studio Theatre kept the atmosphere intimate, but the house was still packed with directors, actors and theatergoers alike.

Among the plays were comedic performances such as Walter Wykes’ “Family 2.0,” directed by Stacey Olson. Some, like Ann Wuehler’s “Traces of Memory,” directed by Eden Moad, kept the audience shrouded in suspense and mystery. Other plays had darker themes and storytelling, such as Elizabeth Miller’s “Fugue,” directed by Morgan King.

The play’s title refers to the repetitive nature of the events depicted within, as fugue is a musical term for introducing parts or melodies separately, then interweaving them.

“It showed how some people are so dark and things can keep repeating, and people aren’t looking for it, and aren’t trying to catch it,” King said. “That element within “Fugue,” I made it so that the male character, Harry, was constantly in the middle, or constantly in a place where he could talk to all of the girls at the same time.”

King said that Harry’s role in the show, as an adult who preys on young girls, and uses the same method to lure his victims, thus the repetitive meaning of the title.

Given little more than a month to prepare for the plays, the directors and their casts worked quickly to put together their performances.

“Honestly, I wasn’t sure how it would go, because all week we had been rehearsing,” King said. “But when we were rehearsing, it was more of a rehearsal, not performance, type of atmosphere. When we were in rehearsal, somebody had actually laughed during my play. And my play was very dark, so I was very concerned. But when we actually did the performance, people were reacting to the different elements within it. And I was just amazed at how well the audience reacted to it.”

This marks the final fall performance for Simpson Productions.