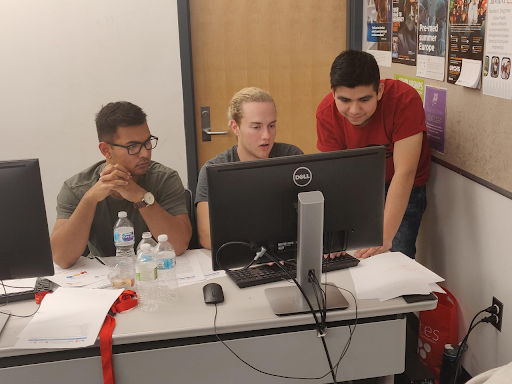 Photo submitted to the Simpsonain

Simpson’s computer science students were able to show off their programming skills with their excellent results in the regional round of the International Collegiate Programming Contest.

ICPC is an annual competition that over 50,000 students in over 100 countries participate in. The regional Simpson competes in is the North Central North American region, which includes teams from Minnesota, Wisconsin, Western Ontario (Canada), Manitoba (Canada), Iowa, North Dakota, South Dakota, Nebraska, Kansas and Michigan.

Eighteen students from Simpson attended the contest at Iowa State, one of the regional locations for the competition. These students were split into six teams with three students per team.

This was a record number for Simpson, which reflects the growing enthusiasm among Simpson students for these contests, even though they do not get any extra credit for going.

The contest is a tough challenge lasting five hours. The problems the students must solve are extremely difficult. They require not just programming skills, but also good problem solving, strategizing and team communication.

The top teams are traditionally from the large public institutions (Wisconsin-Madison, Nebraska-Lincoln, Iowa State), who have the advantage of much larger student numbers.

Simpson’s highest placed team was 36th out of 180 teams.

This was initially a slightly disappointing result because in both the previous two years, Simpson had the highest place team from any liberal arts college in Iowa.

But this shows a testament to Simpson’s higher expectations; When Simpson started competing eight years ago, it was an achievement to get a team into the top 100 — an achievement which Simpson has now well surpassed.

Simpson’s participation numbers and results demonstrate the strength-in-depth of the program. Simpson’s second team also experienced some success, finishing ahead of Coe’s second team, but behind Buena Vista’s.

All six of Simpson’s teams finished ahead of Coe, Central and Luther’s third teams.