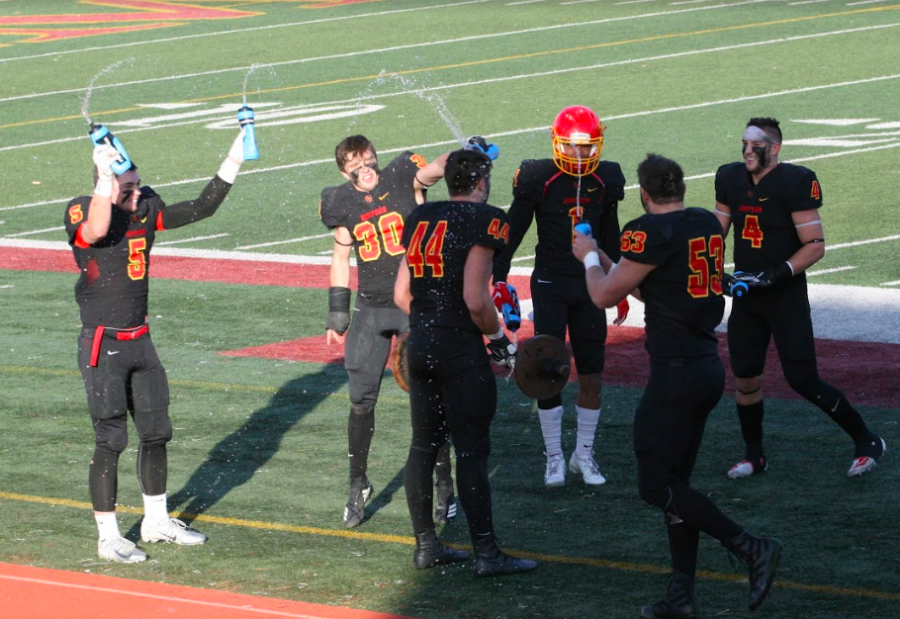 The Simpson football team finished the season with a 16-10 win over Luther on Senior Day on Nov. 16.

Starting strong, the Storm were able to get an early lead in the first quarter, with a two-yard touchdown run by sophomore running back Noah Bruckner.

In the next possession, the Norse were able to score a field goal, but the Storm’s senior kicker Zach Kreider was able to extend the lead to 10-3 going into halftime.

After halftime, the Norse scored a touchdown, bringing it to a 10-10 game.

The Storm were able to score the winning touchdown in the third quarter, with a 36-yard pass from senior quarterback Tanner Krueger to senior wide receiver Sam Bartlett.

The Storm defense recovered one of two fumbles in the red zone during the fourth quarter, holding the Norse to 10 points, and allowing the offense to run out the clock on the last drive.

Senior Brendan Holmes also increased his school record by 10 tackles to a career total of 369.

“The biggest thing with Holmes is he epitomizes everything Simpson football is about, but the biggest thing is his consistency. You know what you are going to get from that kid day one, or day 100,” head coach Matt Jeter said. “He’s an All-American type of player that played in 40 games for Simpson, starting as a freshman. Which enabled him to able to break the tackle record.”

Joining Holmes, senior Michael Connor is the third player in history to have over 300 tackles, with a game-high 15 tackles.

With Bartlett’s touchdown catch, he increased the Simpson record to 16 touchdown receptions in a season.

“Sam Bartlett is also an All-American type of player,” Jeter said. “He has had a couple of injuries in my first two years here. This year he came in the best shape that he’s ever been in. He’s been healthy for the most part throughout the season and he’s been able to be a big-time receiver in the conference, but also in the country.”

“Collectively, the appreciation and love that the staff and I have for all of their commitment to excellence for Simpson college and Simpson football,” Jeter said.

The seniors this year have made an impact that Coach Jeter hopes sticks out to the rest of the team. He says they are a selfless group that works very hard, caring more about the team than their standings.

“Discipline [is] something Coach Jeter instilled in me, and I know a bunch of the other players as well,” Homes said. “Being disciplined enough to get up at four in the morning and come to work out, do the little things that they might ask, like wearing a certain outfit to every meeting. Another one is selflessness. Not worry about yourself so much as being more of a team player. That’s something I plan to take into my career as well. I work with teams at my job.”

The skills learned through being a part of a team can go well beyond the last game.

“I’ve been working as a strength coach and being a leader on a football team is pretty similar,” Bartlett said. “Getting a big group of people to be on the same page and all have a common goal, figuring out what people’s strengths and weaknesses are, then utilizing those to the best of your ability. With a football team or strength and conditioning, you want to create a specific culture or environment, so I take those on.”

Ending with a win is something Coach Jeter hopes will keep the team motivated into the offseason. Being the last game, it’s still a bittersweet moment.

“In this class of 15 seniors, a lot of them committed to Simpson prior to my hiring as head football coach and they stayed the course, committed to the process and being part of the Storm family,” Jeter said. “So, they have a special place in my heart and have done some great things over the last 4 years to help raise the expectation level of Simpson football.”