Statements made after professor uses N-word 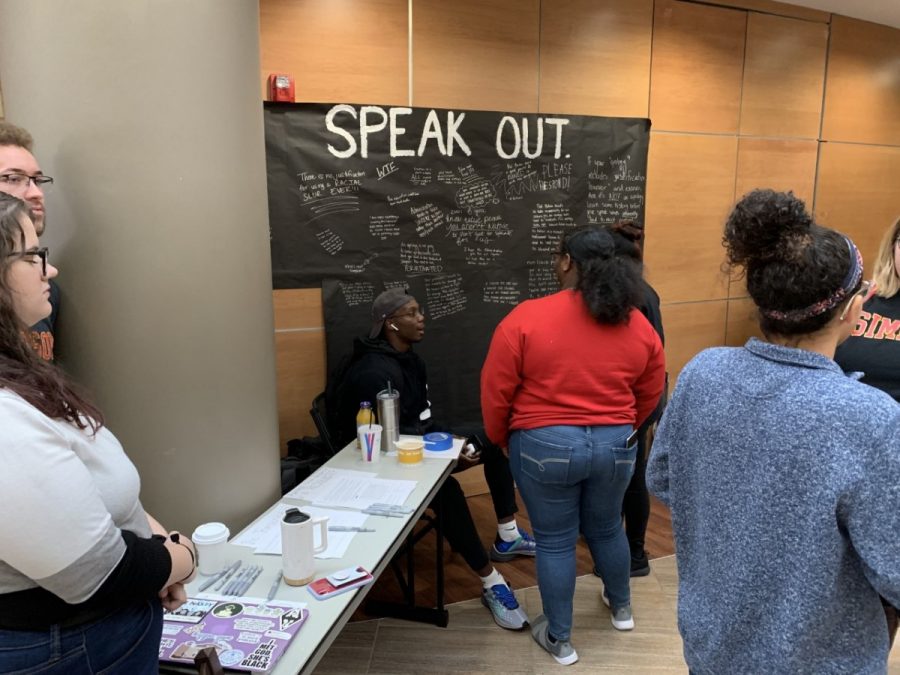 Student Government Association tables in Kent to talk about the issue. / photo by Gunnar Davis

President Jay Simmons and the Student Government Association have released statements after a professor used the N-word in class on Wednesday.

In an email to Simpson College, Simmons addressed the incident and encouraged the campus to revisit the inclusivity statement adopted by the Board of Trustees.

“I send this message with an appeal to all of us — faculty, staff, and students — to refrain from using language that can be insulting and hurtful to others,” Simmons wrote. “We can and must talk about why these terms and the history behind them are so damaging, but we must also approach these discussions with care, respect, and humility. In sum, we can discuss the themes, history, and impacts without resorting to the use of the terms themselves.”

The statement comes after associate professor John Bolen used the racial slur in his Philosophy-110 course to compare the word to that of the mascot for the Washington National Football League team.

“It would be the same thing as having a team called, like, the Florida (N-word),” Bolen said, according to a transcript of a recording of the class sent out by SGA on Twitter.

Bolen said he included the word to try and get a reaction from his students, according to the transcript.

“This behavior and this speech is unacceptable. Tomorrow, SGA will be tabling from 9:00 am to 5:00 p.m. in Kent for students to voice their opinions on the matter of this incidents and what should be done about it,” SGA said in a series of tweets Wednesday night.

Bolen sent out an email to his class issuing an apology for his actions.

“I said what I said for shock effect, and as a result offended, and for that, I do apologize, but it is a reminder of how far we still have to go,” Bolen said in his email. “I am encouraged that you are so offended by the N-word, because you should be, and we should be equally offended by the R-word, and I know many of you are.”

SGA says that they have brought this issue to academic dean Cheryl Jacobsen and the Committee for Academic Diversity, chaired by Mimi Kammer.

As of now, Simpson College has not announced consequences for Bolen.