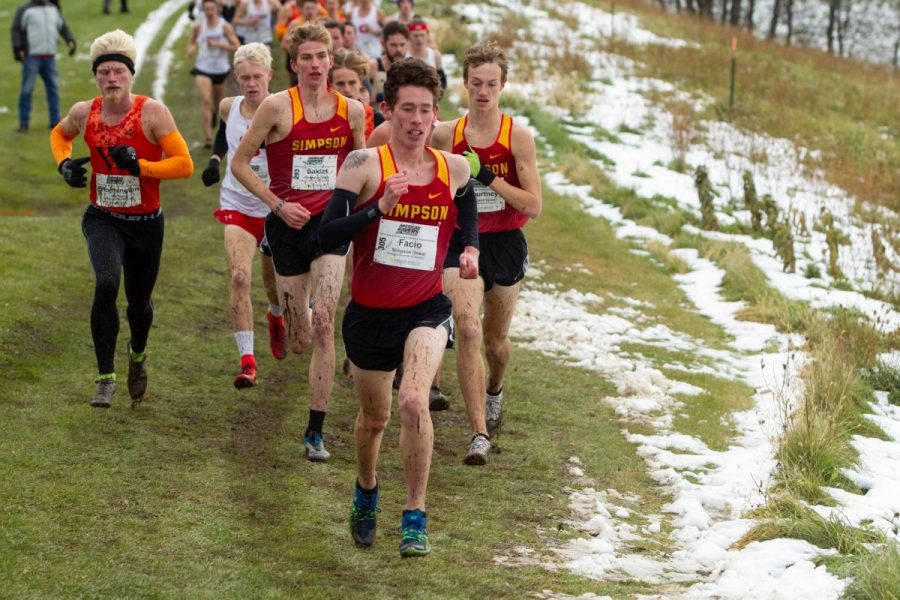 Through cold conditions and a muddy trail, the men’s cross country team finished sixth in the A-R-C Championships on Nov. 2 in Dubuque.

“The conditions were awful, but I think as a team, we were mentally prepared to just go out there and compete,” freshman Spencer Moon said. “The team had a great two weeks of training going into conference, so that helped with our confidence quite a bit.”

Both Moon and Facio have been an integral part of the team’s success this season, finishing in the top two for the Storm in almost every meet.

“I try and channel all the nervous energy I have into excitement. I think successful races come from relaxed focus when I can have fun and only worry about the present moment,” Facio said.

With their constant triumphs during competition day, the high marks for Moon and Facio haven’t gone unnoticed by head coach Heath Moenck.

“Jonathan and Spencer are a great one-two punch,” Moenck said. “They are both looking terrific and I am confident that both will run their best in the final meet.”

Aside from personal performance, the men’s team is looking to make a statement in their last meet of the season after being removed from the top 10 regional rankings last week.

Although the cross country squad has finished only once in the top 10 since 1996, they are determined to reclaim their spot as one of the best teams in the region. That goal can be achieved this Saturday at the NCAA Central Regional Meet.

“Being taken out of the top 10 is a little bit of a reality check for us,” junior Ryan Courtney said. “It just goes to show that we cannot afford to be content with where we’re at because there is always a team ranked behind us that wants to beat us.”

Courtney believes the team’s main focus for regionals will be closing the gap on Nebraska Wesleyan and Central, a goal they failed to accomplish in the conference championships.

Of the teams ranked in the central region for men’s cross country, five of the top 10 are from the A-R-C. Central and Nebraska Wesleyan claim the lowest ranks of the five, with Central coming in at seventh and Wesleyan at eighth.

“This is the strongest our conference has been in my nine years with multiple teams ranked in the central region,” Moenck said. “I know it is going to take our absolute best to crack the top five.”

In spite of previous years, the team is eager to prove to themselves and to everybody why they belong with some of the most elite cross country squads.

“As a team, I think we are heading into regionals very strong. We are ready to run our best and compete with the best,” Moon said.

The men’s team will compete for the central region meet on Saturday at 11 a.m. in Waverly.