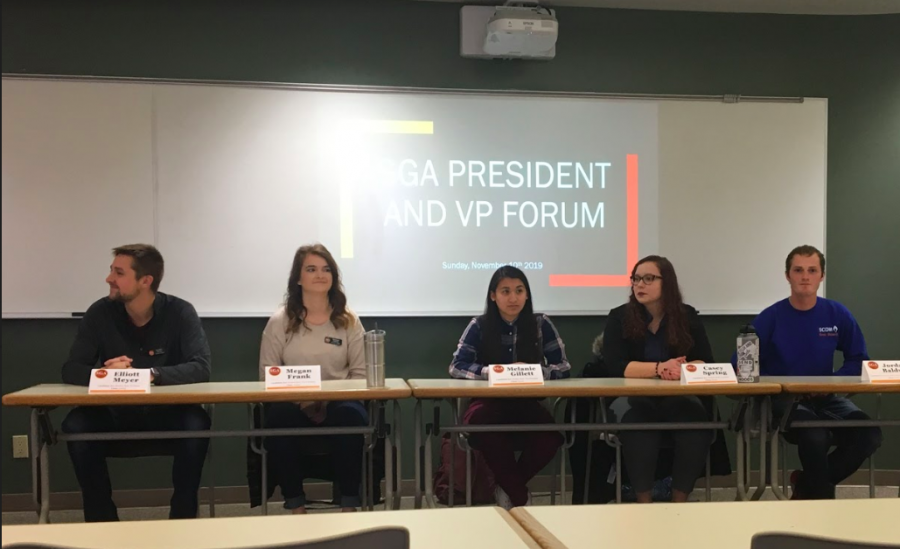 Simpson’s Student Government Association held a president and vice president forum on Nov. 10 for students to ask questions to candidates running for the positions.

Williams, Werner and Clayburn were not present at the event.

Being transparent and inclusive with the student body were major topics discussed at the forum.

“I think transparency is a big issue,” Spring said. “Every time I talk to someone on SGA, I learn something new SGA does and can do for the community. I feel like there should be a bigger platform for people to be really aware of what SGA does.”

Spring suggested sending out summaries of SGA minutes on social media to get more people to read them and holding forms once a month. Spring suggested offering food in order to get students to come.

Gillet echoed this emphasizing that SGA should not get discouraged when receiving negative feedback and to continually be open to feedback from students. Gillet also suggested sending out surveys and adding incentives to get students to take them.

Meyer stated that he believes in face to face conversation in order to be transparent.

“Just talking to people in Kent, specifically for tabling events,” Meyer said. “They are somewhat more effective than the surveys.”

Meyer also felt that there needs to be better communication better with SGA and student organizations. Meyer’s goal is to have a student handbook “to educate people on how to do things in their organizations.”

Frank believes in order to have more transparency, SGA should do profiles of each member on social media for the week.

“I think a lot of it has to do with how we [portray] ourselves to students,” Frank said. “I think students have a more pessimistic view of SGA and what we do.”

Baldwin believes that holding hour long forums each week to allow students to ask questions and voice their opinions.

“I would make it so it’s always on a set day at a set time,” Baldwin said.

Diversity on SGA was also discussed with Frank pushing as a strength of SGA while Gillet felt that it was something they needed to work on.

“It’s not just majors,” Gillet said. “You can have a room full of diverse, different majors and that will say a lot about the different perspectives and views that come to the table.”

She went on to say, “An overwhelming majority of people on SGA are not people of color, it’s not LGBT people, it’s not people with disabilities, but that’s not to say these people don’t have diversities within themselves.”

Frank disagreed with this statement.

“Regarding diversity, that’s one I have a hard time with just because I am white, I am catholic, I grew up in small-town USA,” Frank said. “It’s hard to feel like people think we lack diversity. I don’t know what else I can do to diversify myself and then it feels like my opinions are not relevant because I am not part of an under established group.”

Baldwin and Meyer both felt that SGA has done a great job of helping with projects around campus. Baldwin cited the charging stations and the water stations as good examples and expressed his interest in implementing new ones. Meyers liked the ideas from SGA for the security cameras and putting solar panels potentially on Kent.

Frank believes that SGA should strengthen its bonds with the Indianola community.

“I think Simpson’s greatest weakness is the ties to the community,” Frank said. “It’s one of those things that no one is really doing anything to connect the two together.”

Twelve students outside of SGA attended the event.

Voting will open on Nov. 11 and close on Nov. 18 at noon. The winners will be announced later in the day.