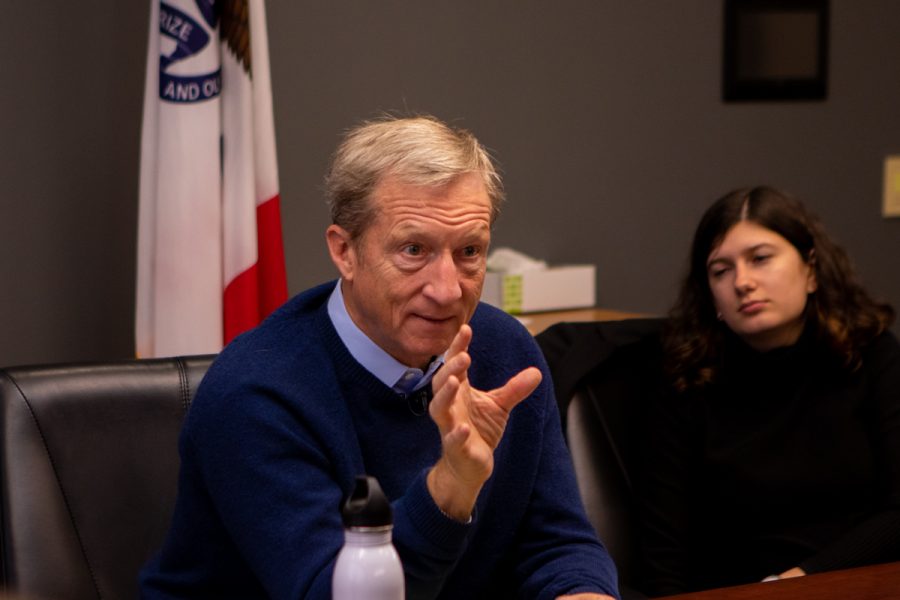 by Gunnar Davis, Editor in Chief

Tom Steyer was the latest 2020 Democratic presidential candidate to visit Simpson College on Nov. 1, where he held a roundtable discussion with students in the Student Senate Room in Kent Campus Center.

Steyer, a self-made billionaire, spoke to a group of 16 students and community members over a number of issues. He made sure to make the participants feel included and had each one individually introduce themselves.

“I was very thoroughly impressed with the way he worked a crowd,” said Rhett Murphy, a senior. “I think when someone does that, you get more of a personal level and you get a personal connection with who that person actually is, and how they’re going to represent you.”

Steyer, known by college students for his YouTube advertisements, spoke about fixing the agriculture business in Iowa.

He then spoke about climate change and how he wanted more green energy options. Steyer complimented Iowa on its wind energy solutions.

Steyer pointed out how he plans to make big companies pay their taxes. He also spoke about his disdain for Amazon and how he would hold them accountable so that smaller businesses have the opportunity to prosper.

“He was very down-to-earth, and he realizes there’s a lot of companies and organizations that break antitrust laws,” Murphy said.

Steyer made a point to mention his dislike for how Washington D.C. is run. He wants to introduce a term-limit for members of Congress.

He talked about his YouTube ads and mentioned that he hopes to reach the younger group of voters who sat out of 2016’s election because they felt like they weren’t being heard.

“As a young person, we believe that a lot of stuff isn’t targeted to us, even though we are the future, essentially,” senior Parker Schenk said. “He understands that he’s going to go to a place where most people aren’t going to go, location-wise. Because he knows that those people matter just as much in elections as big city people matter.”

Steyer will be on stage at the next 2020 Democratic Debate on Nov. 20 in Georgia.