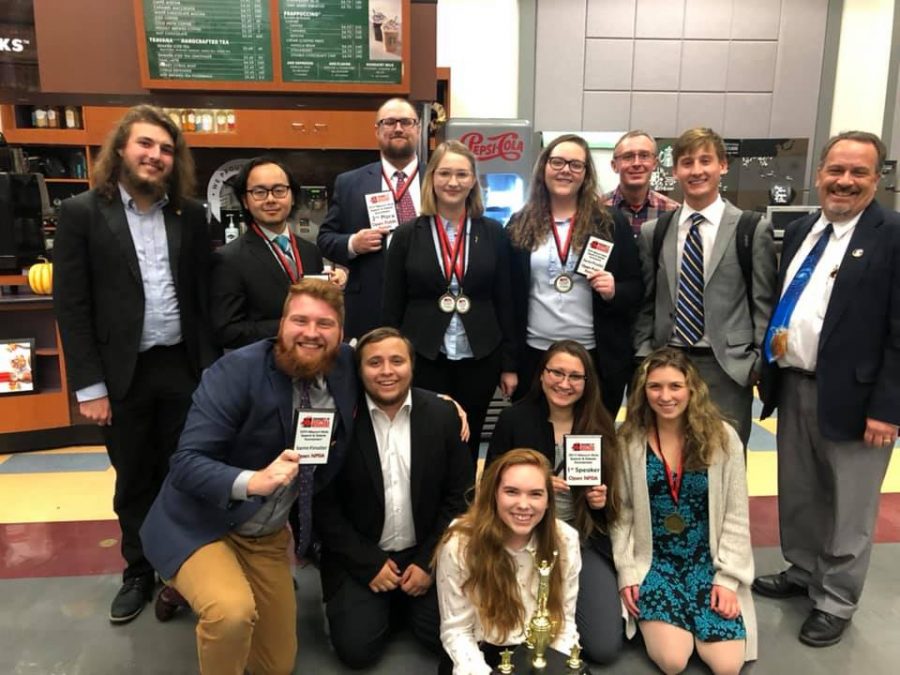 The Simpson College speech and debate team has had great success in their fall season with an excellent performance at the toughest tournament yet.

With the team putting in long hours of practice, they are seeing the payoff during this point in the season. At the recent University of Central Missouri two-day “Mule” tournament in Warrensburg, MO, Simpson College took home a first-place team finish.

“The Simpson College speech and debate team fielded a small squad over our homecoming weekend,” said Spencer Waugh, debate team head coach. “We competed against 25 colleges and universities from across the country. In debate team points, Simpson placed first, winning two of the three divisions. In combined speech and debate points, the squad placed third.”

Waugh has been very pleased with performances for the fall season, noting the team didn’t expect to take home a first-place finish in what he described as the toughest tournament of the season.

“We really just wanted to get students experience to prepare for the national tournament in March,” Waugh said.

The speech team is also doing well according to Deano Pape, assistant director of speech and debate.

“We are thrilled to have the success recognized for the team,” Pape said.

Waugh is also happy with how the debate team is doing.

“On the debate side, we are at the same place we were last time. Our squad is a little bit bigger as we didn’t graduate very many seniors, so we are in a good place to repeat results from last year,” Waugh said.

Students have already signed up for what event entries they will be competing in during the March 2020 national tournament.

“I think the speech side is ahead of last year,” Pape said. “It was the first time that we have taken first place at the first tournament of the year. I’m very excited about that and I think it’s a good sign for our overall speech success.”

The speech and debate team has grown since last year.