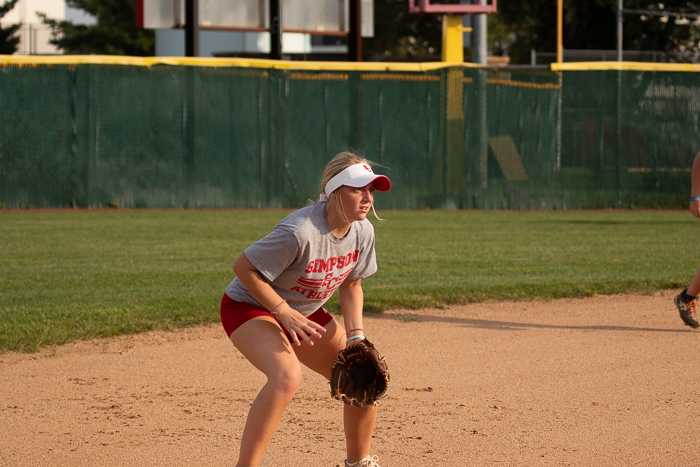 After a solid season on the field last spring, the Simpson softball team was recognized nationally for their work in the classroom this fall.

“Anytime you can reach a national exposure for doing something positive, it’s a feather in your program’s cap,” head coach Brent Matthias said. “It wasn’t something we were aiming at. We were aiming to have our GPA as high as it could be here at Simpson. We always talk about, if you’re going to win at something, let’s just win at everything.”

The Storm were tied for fourth on the list with Amherst. Greenville and Johnson & Wales tied for first with a 3.780 GPA, while Wisconsin-Whitewater came in third with a 3.700. The Storm were the only team recognized in the top 10 from the American Rivers Conference.

“We had 30 people that were on the roster, so 30 people had a 3.68 GPA. I think that’s just crazy,” Matthias said. “To tie with Amherst and to beat MIT — those are nationally known schools, where I would just say Simpson is more regionally known than nationally. To have those schools in the same conversation, it means a lot.”

Matthias says academics are a major part in how his staff recruits athletes and that it’s just as important, if not more, for his athletes to be students first.

“It plays into a big factor in how we recruit. We look at people who at least have the high school academic skills that we think can translate to a tough college academic schedule,” Matthias said. “In Division III, it’s about the student-athlete… for the most part we’re preparing people for their careers.”

“To recruit people who are already in that good academic ability, then we don’t have to hand-hold or push them, because academics should be coming fairly easy to them,” Matthias added.

Junior Emily Bell was one of the 16 student-athletes recognized as an All-American Scholar Athlete by the NFCA. Bell was a second-team all-conference selection as a pitcher last spring — all while maintaining a 4.0 GPA.

Bell also re-affirmed Matthias’ stance of academics are just as important as athletics.

“Being a student-athlete, of course, sports are really important to us, but we’re not all going to be professional softball players,” Bell said. “So, focusing on our academics now will help us in the future and our biggest life goals of getting the job that we want and supporting our families or just starting our new lives after college.”

While the national attention is great for the program, Matthias says it’s just as important locally and to the Simpson community.