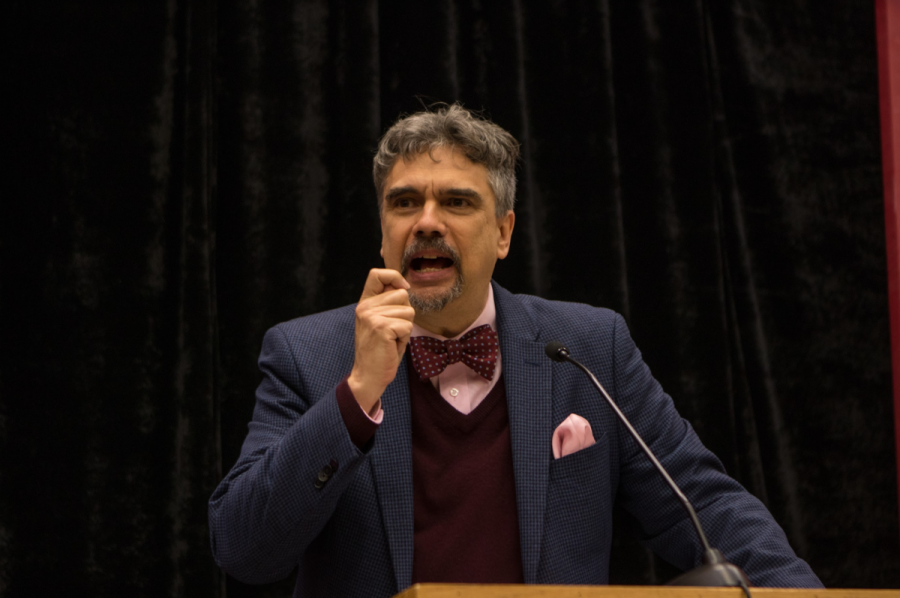 “All enlightened netcentric white philosophy and theology is detrimental to communities of color. All,” De La Torre said in his opening statement to the audience.

De La Torre is an Ordained Southern Baptist who teaches at the Iliff School of Theology as a professor of social ethics and Latinx studies.

The lecture explains how mainstream Christianity uses the idea of hope as a crutch so the people of the white privileged church can ignore the problems of the world with the idea that God will take care of it. De La Torre believes hope has become a middle-class privilege and white people have domesticated it.

“What I am trying to share with communities of color, is to embrace hopelessness because when we embrace it, that is when we become the most dangerous,” De La Torre said.

He believes people need to adopt an idea of hopelessness. De La Torre explains hopelessness does not mean a person is in despair, it means a person is desperate and will do whatever they must do to survive.

“The reason people cross a border, a desert, mountains, because if they stay, they will die. If they leave, they may also die but they may not,” De La Torre said. “It is that desperation that propels people towards radical action. That’s why hopelessness becomes so important.”

De La Torre gives an explanation of radical action using the members of a New York gang called  Young Lords who turned into social activists in 1969. Their goal was to fight for social justice for the working class of Latino-Americans in New York.

The Young Lords went into the streets of the Latino and affluent communities and gathered the trash that was not being picked up by the sanitation company. They took the trash to Third Ave., built a wall with it and lit it on fire.

“When I stand before the unbelievable, anti-Latino sentiments of this country, the racism of this country, the global neoliberalism that is making the middle class poorer and the very few wealthier. When I stand before these global structures that will continue way after I’m dead and all of you are dead, which I don’t see collapsing anytime soon,” De La Torre said. “What is the ethical way forward? Here is where I would argue for a badass Christianity.”

De La Torre addresses his faith and why he fights for justice by saying his faith only reinforces what he is fighting for. He says he would still fight for justice even if there is no God or heaven.

“Even if I’m wrong, even if there is no God, and no heaven, I couldn’t care less. It doesn’t change how I will live my life. I fight for justice not because I plan to get an extra ruby in my crown when I get to heaven, because if you are doing it for that, it doesn’t count,” De La Torre said. “Nor do I fight because I think I’m going to win. I will not win. I’m not going to change the racist ethnic discrimination in this country anytime soon, I’m not going to win. I fight for justice because it defines my very humanity and it defines my very faith that I proclaim.”

De La Torre speaks on where his people stand in the eyes of the church. He said his people live in Easter Saturday. He says, all year churches plan and ready themselves for a half year for Easter Sunday, but the church never stops to realize what happened on Saturday.

The biblical story of Easter Sunday has Jesus being killed on what is now known as Good Friday and used as a time for Christians to reflect and fast. Saturday was a day of sadness and hopelessness. Then Sunday is a day of rejoicing. On the original Saturday, the people did not know Jesus was coming back and that is were De La Torre says that his people live.

At the end of the speech, the room was open to questions. De La Torre answered several questions from Simpson students and members of the audience. There were still hands being raised when Professor Maeve Callan thanked De La Torre for coming and speaking, ending the lecture.

De La Torre stayed after and was thanked by students personally and answered questions which were not able to be addressed during the given time at the end of the lecture.

This article does not cover all of Dr. Miguel De La Torre’s information and ideas which he shared during his lecture. Please feel free to listen to the lecture on the “Speaking of Simpson” podcast, episode 31.