An Enemy of the People shines as Simpson Productions’ first project 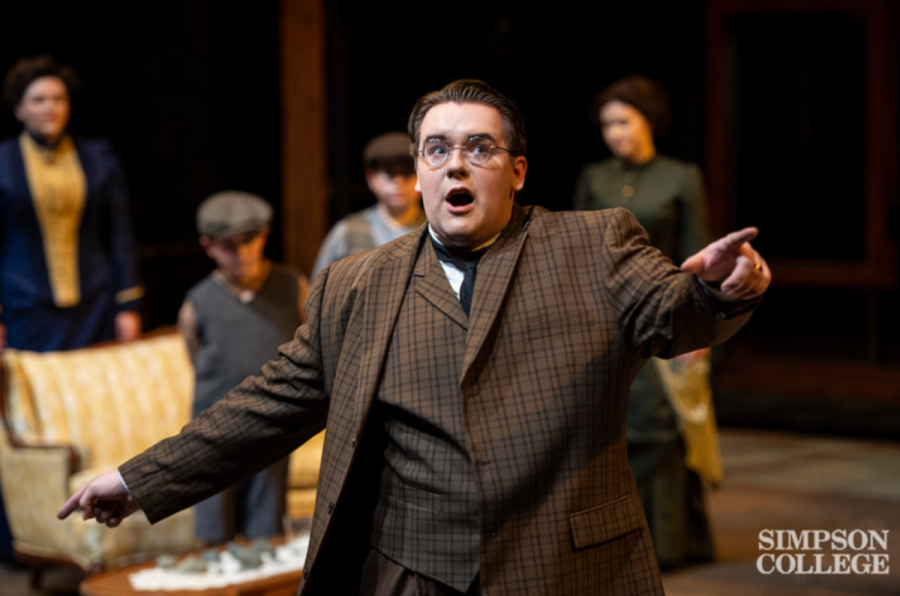 The inaugural season of Simpson Productions started last weekend with the political drama “An Enemy of the People.”

The new merger between Theatre Simpson and Simpson Opera has combined the two performing arts and their talents.

Set in 19th century Norway, the play starred Jack Strub as Dr. Thomas Stockmann, the chief medical officer for his town’s popular bathhouse. Dr. Stockmann discovers the baths, a major tourist attraction and a source of income for the town, are being dangerously polluted and causing visitors to become sick. However, he quickly faces opposition from the town’s governing bodies, who claim the costs of fixing the baths will lead the town to financial ruin.

Elise Sturgeon starred alongside Strub as Katrine Stockmann, Dr. Stockmann’s wife. In approaching the role, Sturgeon says she had to face the character’s seemingly contradictory role in the show, one minute challenging her husband’s ideas for the sake of the family, the next vehemently defending him against an angry public.

“Ultimately, I think she did walk that thin line and she was constantly fighting between those two and that’s something you really have to work to portray, the subtlety between those,” Sturgeon said.

Throughout the show, the audience watched as Dr. Stockmann, discovered who was responsible for the pollution. The Doctor concludes it is not merely one person or even one group of people.

Dr. Stockmann reveals who he believes to be the culprit in the play’s fourth act — a town meeting featuring the entire cast. Town publisher and small businessman Aslaksen, portrayed by Michael Roets, chairs the meeting and the townspeople listen in astonishment as Dr. Stockmann, prevented from discussing his findings on the baths, berates nearly all of them for their stupidity and refusal to do what is right. It is Aslaksen, along with several others, who help to brand Dr. Stockmann the titular “enemy of the people” before the meeting is over.

In the story, Dr. Stockmann isn’t clearly identified as the play’s hero or villain. In fact, there’s not really a single character who wins or loses the moral battle entirely. Every character shows their qualities and flaws, leaving the audience to decide who they believe is right if anyone at all.

“It’s really hard to discern who the good guys and the bad guys are,” Sturgeon said. “You can frame it as, he’s the good guy, he’s always trying to do the best thing, all the rich people are doing bad things and he’s just misunderstood.  But some of the things he’s saying in act four — they’re really problematic.”

Roets claimed his favorite part of the play was the ambiguity of the characters’ ethnicity and morality. Aslaksen is a prime example of this, changing loyalties often throughout the show, but never forsaking his principles of caution and subtlety in supporting either side.

“Was Stockmann technically right that they should have done something about the baths? They were killing people,” Roets said. “He was more than right, but that doesn’t mean the townspeople weren’t justified in being angry that Dr. Stockmann was threatening to go behind their backs to other towns in order to destroy them. Stockmann, in nearly every sense of the word at that point, had made himself out to be an enemy of the people.”

“At some point, you have to lend some weight to the opinions of people who may be less educated than yourself, and Stockmann fails to do that in a very big way,” Roets continued.

As for the play’s modern implications, its environmental aspects definitely draw similarities to today, Sturgeon claims.

Roets sees similarities in the show to modern-day.

“I think that both in the show and in real life, oftentimes we have people with real ideas and real science being ignored in favor of powerful speakers and buzzwords,” Roets said.

Simpson Productions will continue their first season with Mozart’s “The Magic Flute” in November.