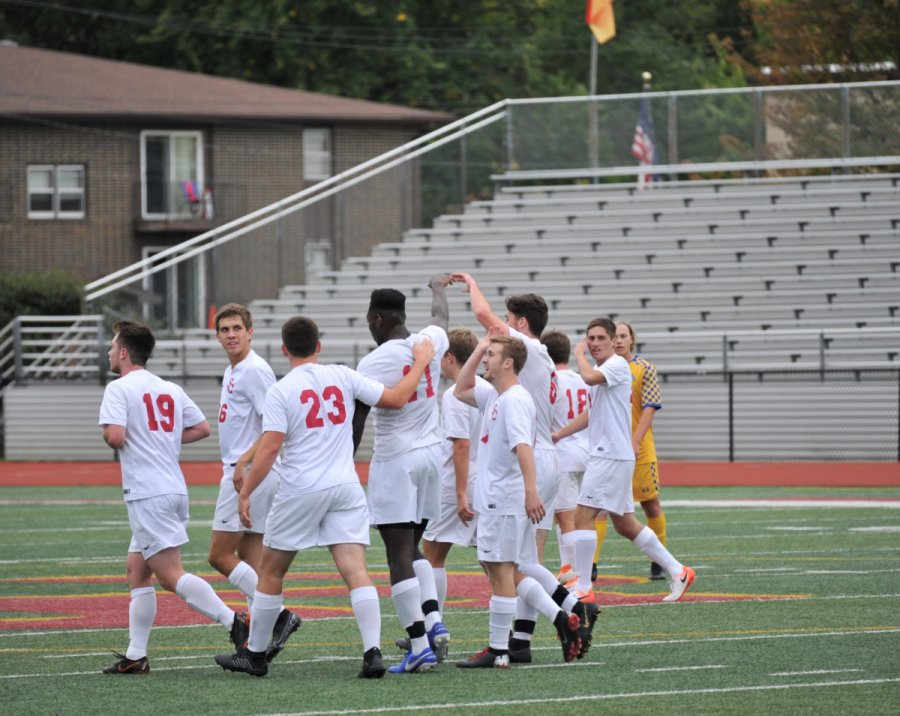 The men’s soccer team defeated Wartburg at the first conference game of the season in double overtime on Sept. 28.

This win put the team one step closer to their goal of competing for a league title.

“We have experienced some success during the non-conference portion of our schedule.  We also know our biggest games still lie ahead,” head coach Rick Isaacson said. “We are eager to see how we stack up against the top teams in our league and region. It should be and exciting few weeks of soccer across the A-R-C.”

It was a tight game throughout, going into double overtime.

“The conference opener against Wartburg was an exciting match. Adding to the drama, we played in persistent rain and the game required overtime to decide a winner,” said Isaacson. “I anticipate that match ended up being one of many tight games that we play as the conference season unfolds.”

At the start of overtime, the team knew that winning was the only outcome they wanted at the end of the game.

“We had dominated the entire game from a statistical standpoint which gave us unmatched energy in those extra minutes,” senior Darius Doswell said.

In an attempt to clear the ball from Wartburg, Doswell got the ball and played it up to senior, Tanner Alderson.

“At that point I knew Doswell was going to put a ball in the box, so I found a little bit of space and it paid off,” Alderson said.

This play ended the second overtime. The Storm won 1-0 over Wartburg.

“That’s the type of chemistry we have, and it showed,” said Doswell.

The team was excited with the win and getting closer to winning a Conference title.

“I felt great about winning the game. Coach Isaacson emphasized how important it was to start off conference with a win,” Alderson said. “Getting a game winner in overtime against a solid team is always a good feeling. I was proud of my team. We played great and we got the result we deserved.”

The Storm now sit at No. 10 in the United Soccer Coaches North Region Poll, released Monday.

The squad will be back in action on Saturday, Oct. 12 against Luther for Senior day at Bill Buxton Stadium.