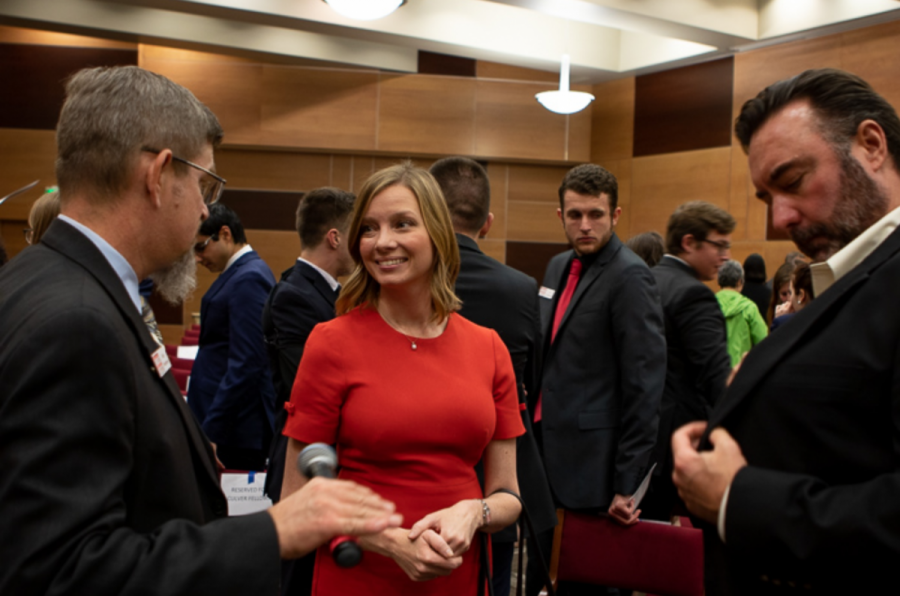 The lecture was given by Kristen Soltis Anderson, co-founder of Echelon Insights, a research and analytics firm. Her lecture was over millennial voters. She discussed her upbringing as a young conservative and debunked the theory that young people are liberal leaning and older generations are only conservative minded.

In attendance were many Simpson students, faculty, alumni and community members.

Anderson began by stating younger voters are often overlooked and forgotten by both the GOP and Democrat parties due to the widely accepted theory that young people are progressive, while older people are conservative voters.

“The problem is that both parties have had an excuse to ignore younger voters for too long,” Anderson said. “It leads Republicans to think they don’t need to talk to young voters because young voters don’t vote and by the time they get around to doing so, they’ll already be in our corner. For Democrats, it allows them to write young voters off and to assume that young people will naturally fall into their camp.”

“As a young Republican woman, I really enjoyed this year’s Culver Lecture,” senior Culver Fellow Erin Magoffie said. “The points Kristen Soltis Anderson brought up concerning the GOP’s relationship to voters, to millennials in particular, were relatable and relevant to me, even though I’m in a younger generation.”

“It was also refreshing to have a speaker address the problems inherent with different aspects of the GOP’s approach to winning over voters, without her blatantly dismissing the party or bashing their potentially outdated platforms,” Magoffie said.

Other students in the crowd had similar positive reception of the information in the lecture.

“As a person on the liberal side, it was interesting listening to her as a Republican pollster on how Republicans can work to improve their voter turnout with Millennials,” senior Culver Fellow Amir Suljic said. “Just discussing the debates that are happening between younger and older voters I find is important. I think that her bringing that topic up is an issue that should be looked at more by both parties.”

Anderson pointed out while Republicans have struggled to get young peoples’ votes, they have done it in the past.

She also commented that the age to party correlation myth is perpetuated because of the change that occurred in the baby boom-generation, though other generations have not actually followed this trend. There is still hope that regardless of age voters can still get on the same page.

“You don’t have to go back that far in American political history to find a time when young voters and their grandparents effectively had the same sort of voting behavior. You can go back to the election of 2000. In that 2000 election young voters and senior citizens alike broke for Al Gore by about a three-point margin,” Anderson said.