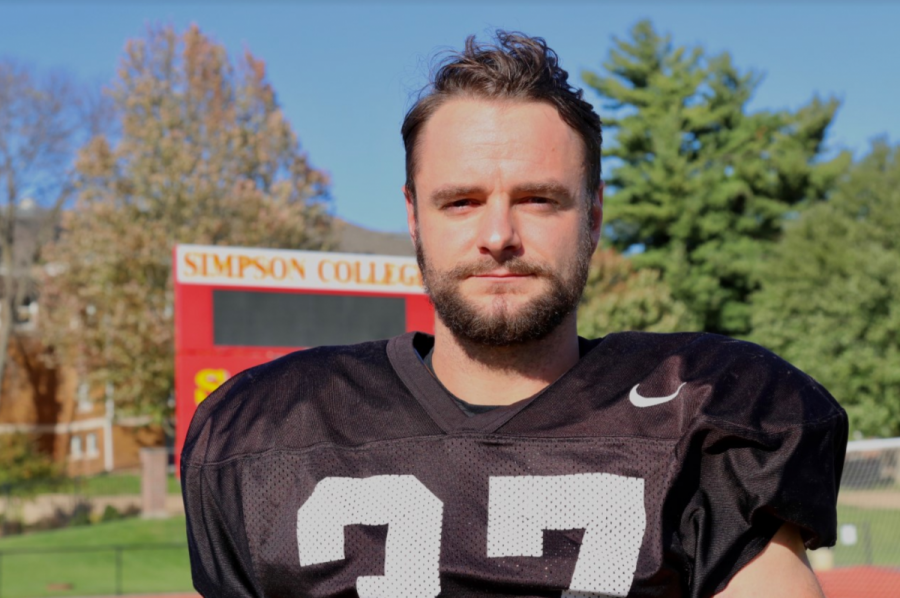 Attend a Simpson football game and it’s easy to see the impact fifth-year seniors like Sam Bartlett, Michael Connor, Jake West and Luke West have on the team. After last Saturday’s road win over Nebraska Wesleyan, the Storm remain unbeaten in the conference. However, the team also benefits from the maturity and leadership of 28-year-old Green Beret Jeremiah Gates.

While the fifth-years are capping off their collegiate football careers, Gates is at the beginning of his.

Originally from Grinnell, Iowa, Gates signed up for the Army when he was 17-years-old. He left for basic training just 10 days after graduating from high school and quickly ascended through leadership positions. He was then selected for, and passed, the requirements to join the United States Army Special Forces—the Green Berets.

After his second deployment to Afghanistan, he decided to pursue higher education.

“I had always thought about my options in case something happened,” Gates said. “The U.S. was limiting combat operations and I felt like my job was done for the time being.”

Looking for a degree in criminal justice, Gates found a home at Simpson and began classes in the spring of 2019.

“I searched through a list of Military-friendly schools, and Simpson received a bronze rating for military friendliness,” Gates said.

GI Magazine selected Simpson as a military friendly school placing it among the top 20-percent of all schools in terms of access for veterans. Simpson and the Department of Veterans Affairs jointly pay the portion of an eligible veteran’s tuition not provided by the Post 9/11 GI Bill as part of the Yellow Ribbon Program.

Accustomed to hard work, Gates also decided to try his hand at football. He excelled on the gridiron while playing for Grinnell High School and felt he could contribute to the Storm.

“I had a good friend of mine graduate from and play football at Simpson,” Gates said. “It seemed to have the exact culture I was looking for.”

In his first season with the team, Gates has helped raise the level of competition. Senior team captain and all-conference linebacker Joseph Weppler has seen Gates’ influence within their position group and the entire defense.

“[Gates] isn’t afraid to step up and set the tone every day,” Weppler said. “He brings his hardhat and will play any position needed.”

In practice, Gates assists in learning and mimicking the opponents’ defense to prepare the Simpson offense. After week three, he was selected as scout team special teams player of the week for his work in preparing the team to take on the University of Dubuque.

“Being part of a team helps the transition from the Army,” Gates said. “I love the team and football mentality.”

The Storm will return home on Saturday, Oct. 19 to play their homecoming game against Wartburg. Kickoff is scheduled for 1 p.m. Last year’s contest resulted in a Storm victory when quarterback Tanner Krueger caught a reverse pass from wide receiver Austin Hronich in overtime.