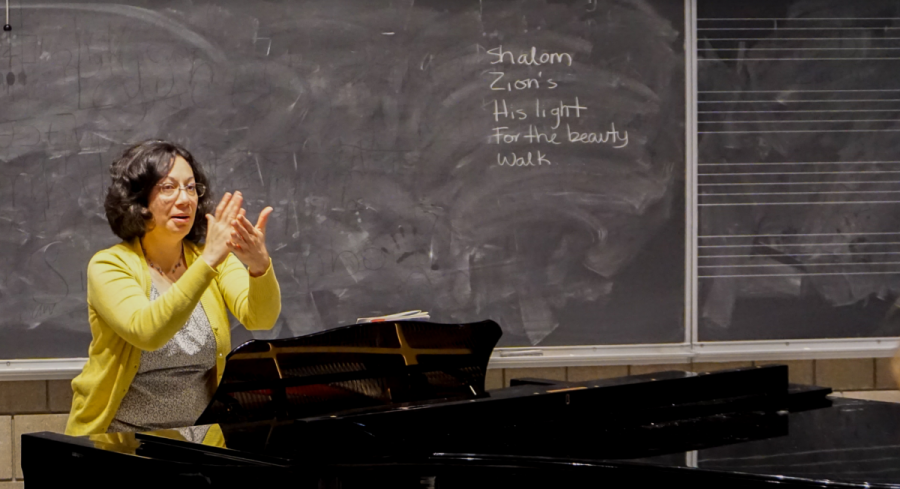 Music students and the department chair reflect on the music department after changes in faculty and program.

“When I came to Simpson, I didn’t expect so many changes to happen in my time here, especially concerning faculty,” junior music education major Lindsay Richter said.

Last year, the music department lost three faculty members, one as a result of program prioritization, and two that left the department. Since then, the program has hired professor Loida Pineda as interim director of choral studies. Due to the short notice of her predecessor’s departure, Simpson allowed an “expedited search” for a year long replacement.

Another change is the lack of female chorale this year.

“Projected choral enrollment … did not support offering a women’s only group … ” John Benoit, Music Department Chair said in an email.

Music and theater are now working together in performing operas, musicals and plays in collaboration under the title Simpson Productions.

The music faculty also plans to evaluate their class offerings to prepare for re-accreditation by the National Association of Schools of Music.

Benoit expressed that despite the recent troubles, he feels Simpson currently has a stronger department in general, compared to when he first became faculty in 1994.

“A lot of us are trying to cling to that image we were given of Simpson,” junior Ellie Brazeal said. “I feel like there hasn’t been a lot of transparency between the people in charge and the students.”

Brazeal is a music education major who has concerns that music at Simpson no longer fits the branding she was sold as an incoming freshman.

Brazeal, who is also the social media and recruitment UGA for the music department, expressed a need for the department to adjust its marketing towards incoming freshman.

Brazeal and Benoit both feel there needs to better reflect the changes in the department and adapt to the generation’s preferred methods of communication.

Benoit also highlighted how change was coming regardless of program prioritization. The way music is taught nationwide, and adaptations to the changes within the music market.

While Richter is hopeful for the future of the music department, she also understands why others might be worried about the changes. She felt the transitions within the department are going as smoothly as possible.

“People of the future will be just as interested and invested in music as they have always been throughout human history. There will be music at Simpson for as long as there is a Simpson College,” Benoit said.