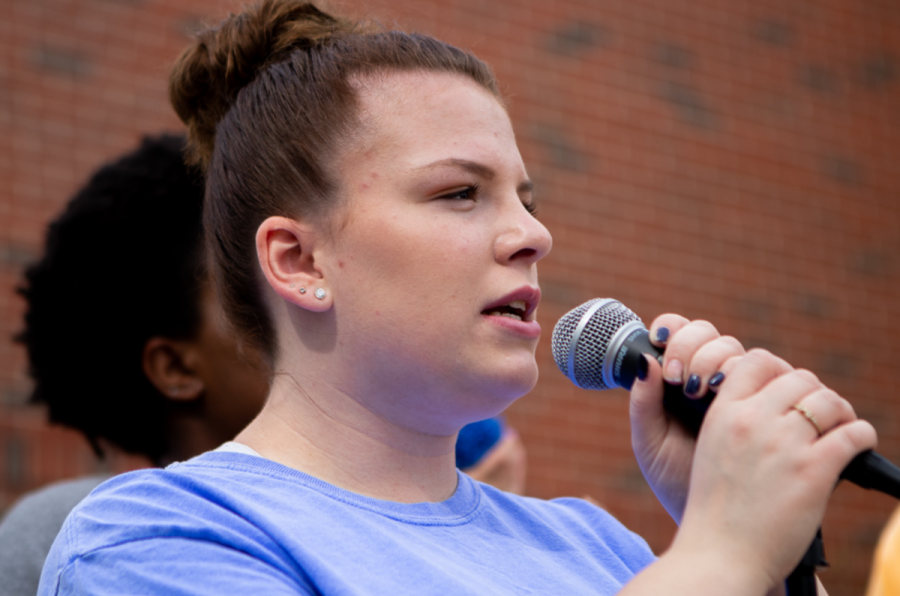 The Simpson Sexual Assault Response Advocates, otherwise known as a S.A.R.A., are in the middle of it’s “Take A Stand” event this week to stand against sexual assault on Simpson’s campus.

S.A.R.A. hosted a similar event last year outside of Dunn Library, but this year the event is happening outside of Kent Campus Center. The event has students standing on a stage as a symbolic way of protesting against sexual assaults here at Simpson.

“We hold this event to draw awareness to sexual assault and harassment on college campuses and allow people to take a stand against it,” president of S.A.R.A. Paige Bendt said.

Bendt went on to talk about how she wanted the event to start a dialogue between students and S.A.R.A.s so that people wouldn’t have to feel ashamed or pressured into staying quiet about their experiences.

The event hosts multiple kinds of performances and activities, such as reading poetry, singing songs and some students just to doing their homework.

“People are welcome to show up and read personal statements or even do homework. It really is up to the person how they choose to stand against sexual assault,” Bendt said. “This event is really about having someone on stage to take that stand.”

The NSVRC also states that 90-percent of victims do not report the assault.

An email was sent out to the Simpson student body and staff that detailed crimes and incidents reported to the college.

From the email provided, 2017 saw five incidents of rape on campus. This statistic is higher than it has been in the past, excluding 2016, but there could be a few reasons for this.

There could be more sexual assaults on campus, or victims could be feeling more comfortable coming forward with allegations.

“I think the fact that we are learning about more sexual assaults could mean that victims are feeling more comfortable coming forward and it’s part to help them with whichever decision they choose to make,” Bendt said.

At this time, the statistics don’t provide much context to how well the college is doing in terms of safety.

S.A.R.A. aims to have more victims feel comfortable with reporting incidents if they choose to do so.

“If you have any questions about anything dealing with sexual assault, S.A.R.A.s will be willing to talk to you about it during the event or anytime after,” Karrecia Crawley, a Simpson S.A.R.A., said.

S.A.R.A. is still looking for people who would like to participate in Take A Stand. The event will last until Friday, Oct. 4.