Banning due to vaping related illnesses 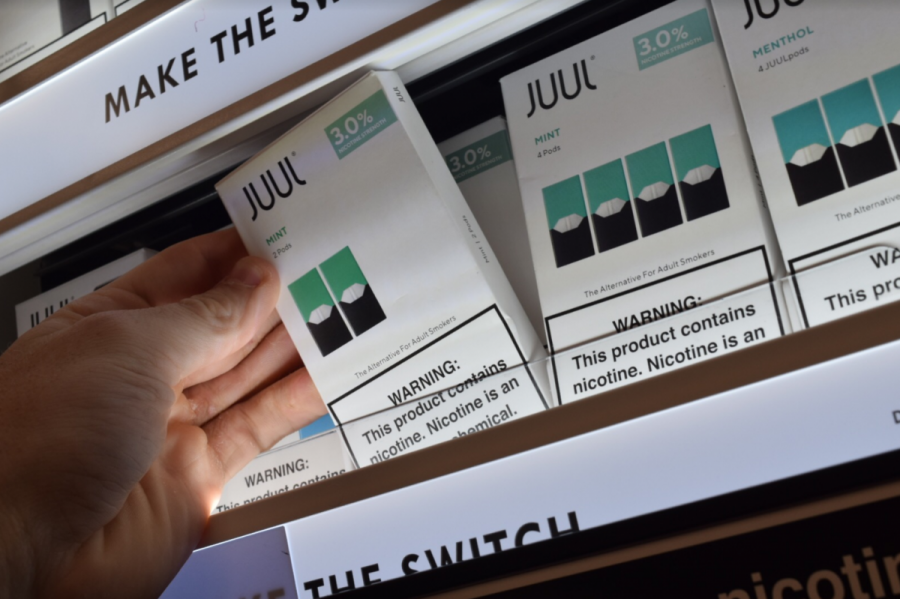 After a incidents of illness and even death, politicians are now looking at banning vaping, much to the disappointment of some college students across the country.

Vaping products have been on the rise for the past few years. There are an assortment of new devices and flavors catching the attention of teenagers and young adults. These devices include electronic cigarettes, vape pens, and Juuls. The flavors range from fruits, baked goods and candies.

These devices are used for flavored nicotine, marijuana, and non-nicotine liquids. The amount of nicotine in each pod varies depending on the amount purchased.

Most patients have been hospitalized due to their symptoms. They start off with coughing, chest pain, and shortness of breath. In extreme cases and as use of the product continues, symptoms change to nausea, vomiting, extreme weight loss, diarrhea and pneumonia.

Even though the patients who survive are cleared to leave the hospital, they still leave with acute respiratory distress syndrome. ARDS is the buildup of fluids in the lungs that prevents the proper amount of oxygen to circulate the blood stream and in some cases increase the amount of carbon dioxide in the bloodstream.

“The deaths that are being linked to vaping has actually just recently been attributed, by the CDC, to black market cartridges of THC oil for dab pens,” Seth Larson, a junior who vapes, said. “I think that it is possible that a few of these cases may have been worsened or even entirely caused by vaping, however I don’t think that is the majority of the cases that we are hearing about now.”

Many people have become outraged by teens using this product, the recent illnesses and deaths. Agency officials worked to remove the flavors from the shelves hoping it would decrease the number of underage users but that did not work. Now President Donald Trump is realizing the issue and is working to ban the products.

“While I like the Vaping alternative to Cigarettes, we need to make sure this alternative is SAFE for ALL! Let’s get counterfeits off the market, and keep young children from Vaping!” Trump tweeted on Sept. 13.

“I think Trump attempting to ban Juuls is rather silly, in all honesty,” said Larson “I’m in no way saying that Juul is harmless or that vaping in general is harmless, because that’s definitely not the case. However, there are definitely more dangerous things out there that aren’t illegal that I think should be given attention.”

While Trump, the Food and Drug Administration, and many other organizations have been working to ban vaping products, Michigan has been the first state to ban flavored e-cigarettes. How far the legislation of banning the vaping products will go is unknown as of this point, but is being worked on.