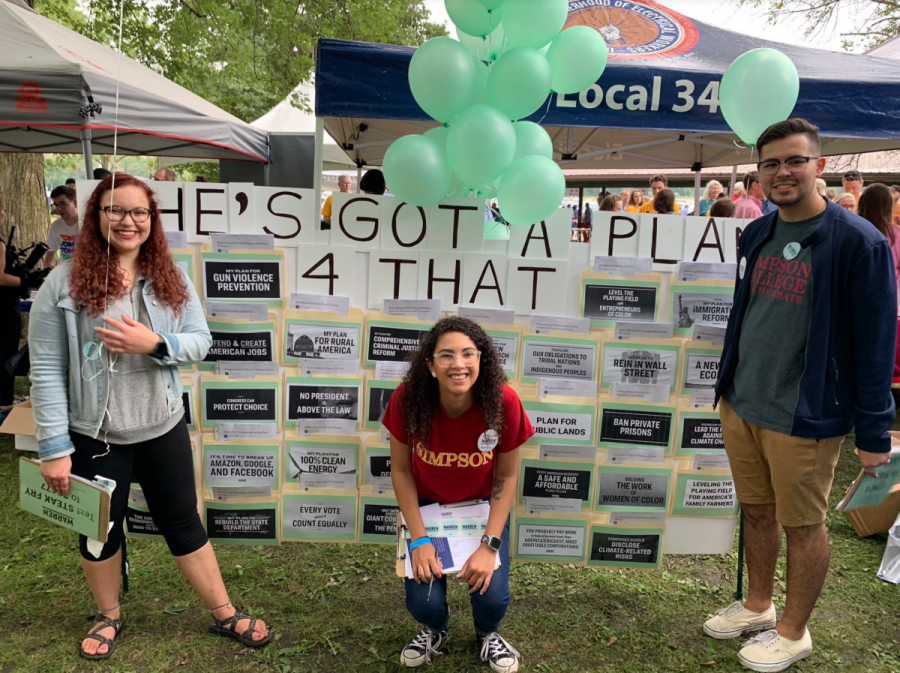 Simpson students are getting involved early and often for this presidential election and the past weekend’s events were no exception.

This weekend Des Moines was host to one of the biggest political events of the year for Iowa. What used to be known as the Harkin Steak Fry is now the Polk County Democrats Steak Fry. It is one of the larger Democratic events in Iowa and the Des Moines area based on the number of candidates in attendance.

The Steak Fry has been in existence for almost 50 years as a part of Iowa tradition with distinguished guest speakers and great food. This year was no exception as 17 of the 19 Democrat candidates made an appearance.

Several Simpson students and recent alumni attended the event as either an observer or member of a campaign staff. One of those students was junior Jailyn Seabrooks.

Each campaign had a staging area in the parking lot to welcome attendees and then a tent camp inside the event with opportunities to meet, talk with or grab a photo with the candidate. The event also had a main stage where every candidate was able to speak as well as other prominent Iowa Democrat elected officials.

“I watched seven speeches total at the main stage but I bumped into, I think, five candidates before that just walking around and seeing them,” Seabrooks said. “I had some small interactions like that and then I waited in Elizabeth Warren’s selfie line to get a picture with her and I got to meet her as well.”

Seabrooks said she has already made her decision on who she is planning to support in this election but she knows there is plenty of time for others to still make a decision.

“I have decided to support Elizabeth Warren in the last couple weeks,” Seabrooks said. “Then I really solidified it at the Steak Fry by getting to meet her and see her speak. There are still quite a few Simpson students who are not sure who they are supporting because there are still so many candidates waiting for the next big event.”

Seabrooks plans to continue to attend political events throughout the rest of the 2020 cycle and take advantage of these opportunities being so close.

“Simpson is a pretty good location for candidates to visit so I’m hoping in the next couple months we’ll have quite a few here and I’ll make sure to make it to all of those. Debate watch parties are another thing I’m pretty involved in,” Seabrooks said.

Seabrooks wants students hoping to get involved with a campaign or simply go see someone speak to reach out to the Simpson College Democrats or Simpson College Republicans to find out more information on specific candidates and campaigns. Those same groups often have campaign representatives speak at meetings in a more relaxed setting than an event such as the steak fry.