Off the ‘Cort’: Junior basketball player gives back to middle school 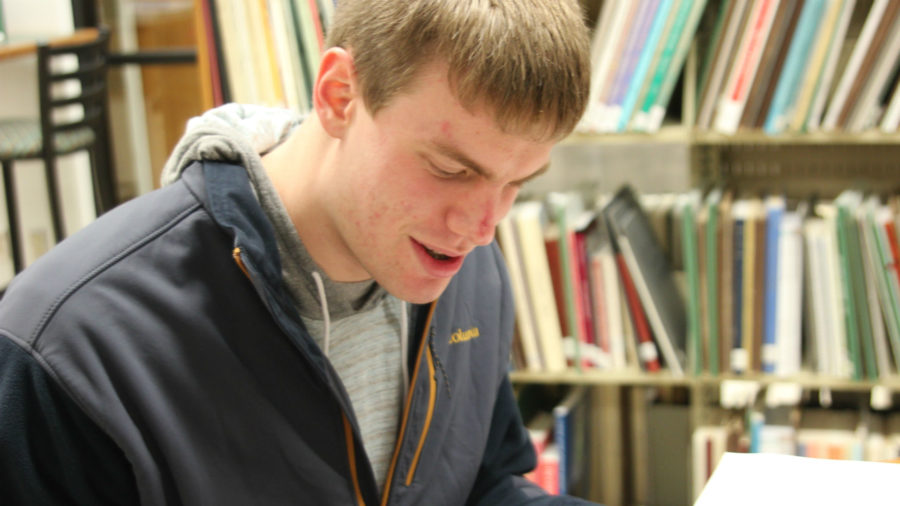 At 6 feet 10 inches tall, junior basketball player Cort Singleton stands out when he walks through the Kent Campus Center or scales the steps to his education classes in Wallace Hall.

But where he stands out even more is at Indianola Middle School, where he is in his third year as a student mentor.

Singleton is a secondary education major, Wesley Service Scholar and an Indianola native who once attended IMS. So when eighth grade guidance counselor Tina Chaplin contacted Simpson looking for student help, Singleton knew the opportunity was perfect for him.

“When I was a freshman, I got this opportunity to help out at my old middle school, so I just jumped on it,” Singleton said. “It lets me give back to my hometown, and it prepares me for my career in education. I kind of get to work on different (teaching) strategies with different students.”

Four years ago, Chaplin reached out to the Indianola community, getting some members of the city to help out with students struggling with academics, studying habits or who were in need of a role model.

Chaplin was able to accomplish the goal of providing a role model for her students, but the adults, who were removed from academic study for some time, couldn’t help on the academic end.

“I had one mentor from the community say, ‘I haven’t done this kind of work with a kid in maybe 50 years. I don’t remember how to do this kind of math,’” Chaplain said. “So I thought we need to get some people in here that know how to relate to these kids and help academically.”

Chaplin aims to pair mentors’ strengths with the academic weaknesses and extracurricular interests of the students, and since then, the program has flourished.

“I think we have had nothing but positive interactions with Simpson students,” Chaplin said. “I had a Simpson girl last year that just worked extensively with her student, and she gave the student just a simple gift for Christmas. It meant the world to the kid because it made them feel special and made them standout.”

Simpson students can meet with as many middle school students as time allows each week. They’ll go over homework, organize assignments, meet with teachers or just talk about daily life.

Last year, Chaplin had a record 15 Simpson students help out at the middle school. The number dropped to three this year, but Singleton has remained.

“It’s a time commitment, and I know that’s hard for Simpson students,” Chaplin said. “That’s one of the things I stress when students sign up. These kids are counting on you because a lot of them have had adults in their past who have broken promises, or abandoned them. That’s the last thing we want to do. We want to build relationships, not break them.”

Singleton has been the epitome of consistency during his time as a mentor, taking on as many as three students at once. Chaplin wouldn’t be surprised if Singleton finds a way to help out even after graduation.

“It feels like since birth (since he’s been working here),” Chaplin said. “He’s quite the achiever. Last year, right before Christmas, he said he had a one hour opening, two days a week and wanted to know if he could come in. He just wants to spend his time with kids and people. I haven’t given him the easiest kids to work with, but he has been patient and consistent.”

Singleton admits that he doesn’t always have the answer to a social studies or science question and will often have to reference the textbook, but he always wants the student to come back at the end of the session.

“I guess a lot of the students I have had in the past didn’t want to be there, so I’ve kind of made it where they like coming to school,” Singleton said.

Singleton tried to get a student to attend one of the Simpson basketball games in the past, but due to logistical reasons, he wasn’t able to. Despite that, students see his height, know he plays basketball at Simpson, adding another level to the reverence he receives from students.

“This is going to sound silly, but I kind of see him as the gentle giant,” Chaplin said. “He’s very tall in stature but very kind in heart. They see him and think, ‘Oh, I better sit down and work.’ There has to be some level of respect, knowing you’ve been able to take what you enjoy to the next level and compete in college.”