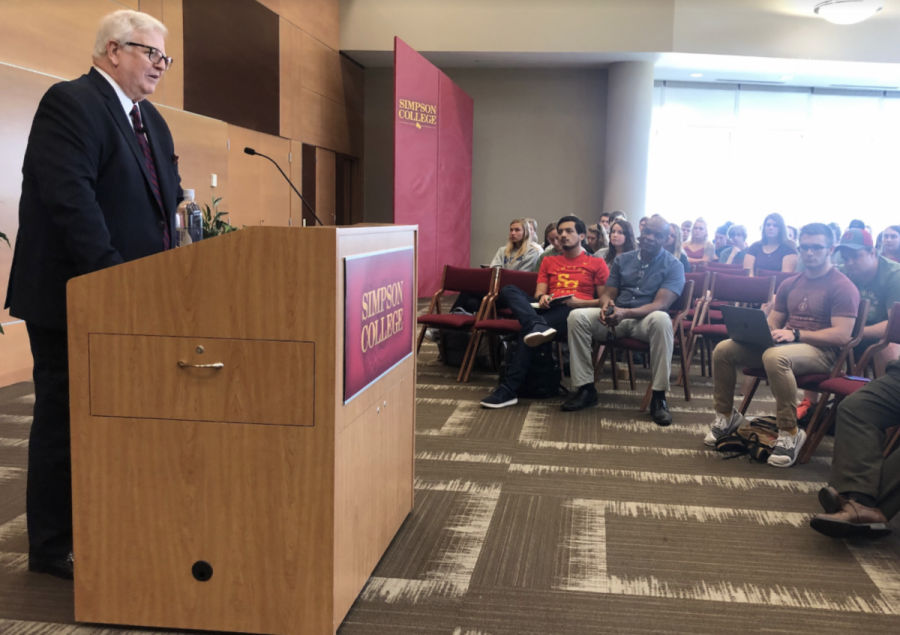 Gene Policinski talks to students about the First Amendment.

by Rachel Neumann, Special to the Simpsonian

Gene Policinski urged Simpson College students to protect the First Amendment at a speech on Sept. 15.

Policinski, president of the Freedom Forum Institute, is one of the founding editors of the USA Today. Now, he advocates for the First Amendment around the country.

He visited Simpson during First Amendment week to deliver an hour-long lecture in Hubbell Hall. Policinski reminded the audience of roughly 200 people why the First Amendment, written in the 18th century, is still relevant today.

“[The Founding Fathers] protected us from that 4 a.m. knock on the door in our homes from some shadowy police agency because we spoke out on a matter of public interest, or insulted a public official or said something that someone did not like,” Policinski said.

Policinski says these freedoms are uncommon around the world. Even in many democratic countries—including Canada, the United Kingdom and Germany—have instituted restrictions on speech and maintain recognized church affiliations.

Policinski mentioned a brazilian journalist who goes to work every morning with a death sentence because she speaks out against the narcotic gangs in her slum.

Still, he notes how useless these freedoms are if citizens don’t understand them. According to Policinski, only six percent of people can name all five freedoms on the first try.

“This safeguard for our freedoms that is the Bill of Rights and this empowering document that is the First Amendment only works if we get engaged and involved,” Policinski said, “It is not a machine that runs on its own.”

While he sees the beauty in the Constitution, Policinski also recognizes its flaws. Prior to changes, like the 13th and 19th Amendments, the Constitution disenfranchised a large portion of the country’s population.

Some people today credit the First Amendment for providing the United States a vehicle of change. Others believe it is a breeding ground for hate speech, especially in the world of social media.