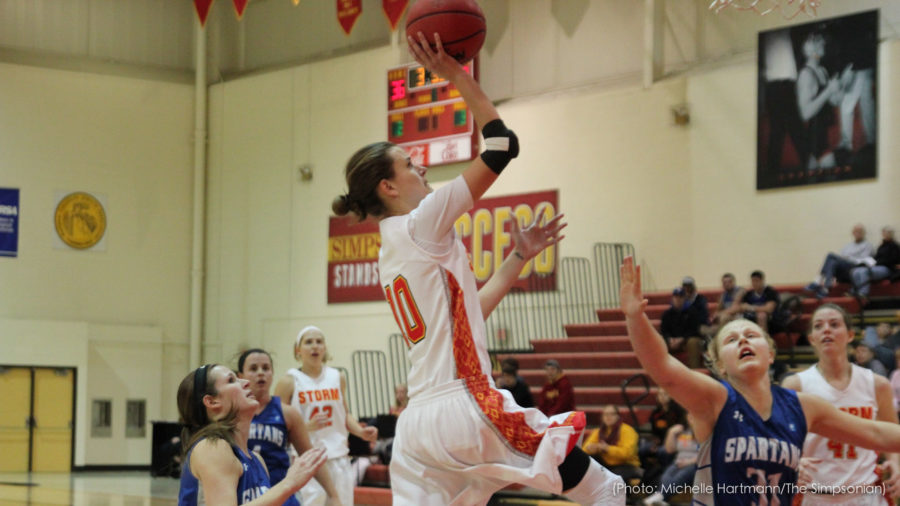 Every successful team needs a player that does the little things, such as communicating on defense, calling out screens, making the extra pass, maybe even accepting a lesser role on offense.

Where would the Golden State Warriors be without Andre Iguodala? The ’08 Celtics without Tony Allen? The Simpson Storm without Whitney Van Wyk?

Van Wyk isn’t asked to score a lot; she doesn’t need to. But when she is on the floor, she has an impact that goes beyond the stat sheet. Whether it be shutting down the opposing team’s best player or rotating to a spot on defense, the senior from Altoona always has her hand in the game.

“Going into a game, my mindset is always that I need to contribute to the team in some way, even if it isn’t going to be offensively that night. I’ve always had the mindset that even if I’m not contributing offensively, I don’t want my presence on the court to hurt the team, so I need to find other ways to utilize my minutes out there,” Van Wyk said.

It isn’t easy to accept a lesser role on offense like Van Wyk has done, especially coming off of a prolific offensive career in high school at Southeast Polk, racking up multiple accolades her senior season.

She was a 2nd team all-state selection, averaging 12 points per game, voted the CIML’s top shooter and set school records for most three pointers in a career and season.

But she has taken her lesser role in stride, accepted it and thrived in it.

“I’ve never been an offensive-minded player, but in high school, my offense came a lot more naturally which led to the success I had then. The nature of the game is so different in college, though. It’s a faster pace and an entirely different style of play, and because of that, I’ve had to adjust, Van Wyk said.

“I could have tried to become more of an offensive threat, but it’s hard to change a mindset you’ve held your whole life, so I found it easier to start focusing on what came naturally for me. I’d be lying if I said it was easy at times to think about the offensive player I was then compared to the one I am now. However, I absolutely love the role I play for this team, and I wouldn’t change that,” she said.

Perhaps her most important assets to the Storm are her knack for creating opportunities for her teammates without turning the ball over and ability to rebound at a high level for her size.

Turning in almost three assists per game and dishing out two assists for every turnover she commits, to go along with four rebounds a game, it’s the dirty work that the 5-foot-10 guard excels at.

“She has become a very well-rounded player and adds a lot of things that winners have to have,” head coach Brian Niemuth said. “It’s the assist to turnover ratio, it’s the rebounding, it’s the steals, it’s all the little things that are important.”

The one part of Van Wyk’s game she takes the most pride in, defense, might just be the thing she does that contributes to her team’s success the most. A thief on the court, hauling in exactly two steals a game and leading the team in blocks at one per game, the senior is usually the best defender on the floor, and she carries herself as such.

“I definitely take the most pride in my defense and I always have, because I think defense is about effort and heart. A great defender, in my opinion, needs to have somewhat of a cocky mindset.

There is a certain level of confidence and pride that needs to be held. A great defender needs to have the confidence in their mind that one on one, they can and will do what they need to in order to shut their girl down and then be proud of that, because defense is hard work that not everyone is willing to put in,” Van Wyk said.

The do-it-all guard is more than just a great player but a great leader as well. Whether it be setting an example on the court or showing the younger players that there is more to the game of basketball than putting the ball through the hoop, the 2014 all-IIAC honorable mention makes her presence felt in the locker room.

“I think it shows everyone that you can really contribute to winning without having to score,” Niemuth said.

And with every unified and successful program, the player echoed the sentiments of her coach.

“I think the biggest example I want to set for them is showing them to not limit themselves. There are numerous ways to contribute to this game and offense has sort of become the glory hog.I don’t mean that in a disrespectful way. Being a great offensive player takes a lot of time and effort to develop into and we need great offensive players. But it bothers me to see players who don’t think they can contribute if it’s not offensively, because the reality is, there will be nights their offensive game is off,” Van Wyk said.

“There will be nights they can’t contribute through scoring. They can still get after it on defense, or be a leader, or be that player that gets everybody pumped up. There are so many important roles to play aside from the offensive role, and limiting themselves to only that is a waste of their talent. So, in that sense I try to be a good leader and show them that there is always something to be contributed to the game and to the team,” she said.

When it comes to expectations for the remainder of her senior season, Van Wyk knows two things her team needs to do: play hard and have fun. In the end, that’s all they can control.

The Storm are guaranteed five more games this season and are sitting in sole possession of third place in the conference. Van Wyk and her team intend to make those games count.

“The rest of the year our team expectation is to make it count. We are guaranteed five more games and as a team, our goal is to make each of those count. This will come from doing the two things we as players can control: playing hard and having fun. Those two things are written on the whiteboard before every game, because at the end of the day, that’s all we can control. Everybody wants to win, of course, but most importantly we want to enjoy what we’re doing. If there’s one thing I’ve learned it’s that you forget about the wins and the losses, but you always remember how you felt when you were out there. The games I most vividly remember in my career are the ones that evoked an extreme emotion, whether it was feeling on top of the world from a win or from a heartbreaking loss. We need to leave games physically and emotionally exhausted, because win or lose that’s what makes a game worthwhile; knowing we left it all out there and made those 40 minutes count,” Van Wyk said.