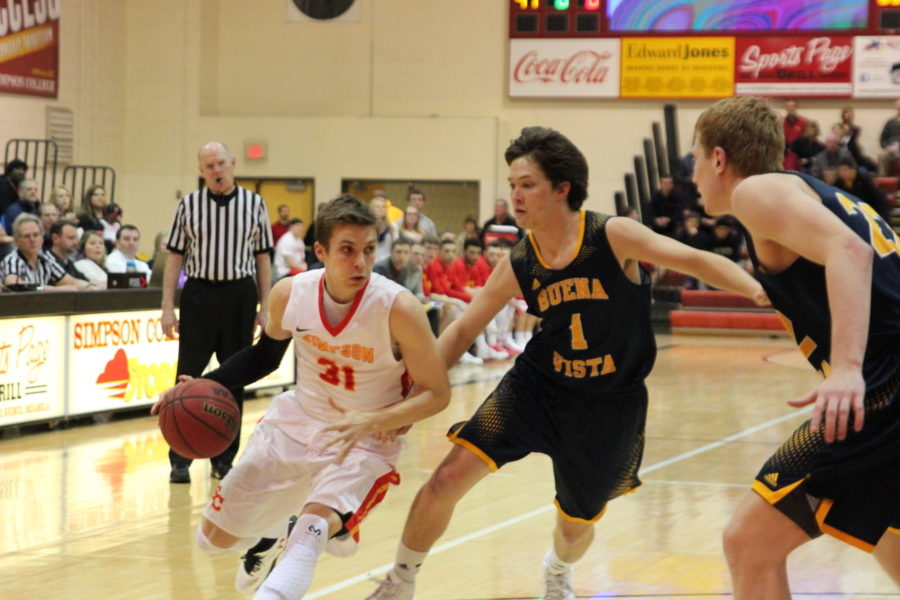 STORM LAKE, Iowa – After winning the Iowa Conference regular season title and taking a trip to the Sweet 16 in the 2012-13 season, the women’s basketball team hasn’t been able to get out of the first round of the IIAC tournament and that continued Tuesday in a 87-61 loss to No. 4 seed Buena Vista.

Simpson (15-11) committed 24 turnovers, leading to 26 Buena Vista points. The Beavers also hit 14 from beyond the arc, five of which came from Lexi Fisher who finished with a game-high 17 points.

Mackenzie Haupt led the Storm with 14 in her final game at Simpson followed by Maddie Bosworth with 11 points.

The women lose three of its five predominant starters, with Britney Boland and Noreen Morrow returning as seniors and juniors respectively.

INDIANOLA, Iowa – After a back and forth, shot for shot first few minutes of the first half, the sixth-seeded Beavers (11-15, 6-9) pulled away and never looked back, defeating the third-seeded Storm (15-11,8-7), 87-58, ending a remarkable season under first-year head coach Brad Bjorkgren. A season that saw Simpson claw their way to Division III’s fourth-best win differential from last season.

“I think we guarded really well in the first 10 minutes of the ballgame, but we couldn’t make shots and I think it deflated us a little bit and I think we panicked a little bit,” said Bjorkgren. “When you get stops, you want to get scores and we just couldn’t get a basket to reward how hard we were playing defensively.”

More of the same was had in the second half, as the Beavers continued to knock down open looks, while the Storm struggled to get any kind of shot to fall, extending their lead to 35 at one point.

The Cowles Crazies stayed loud throughout the half, waiting on a Storm run that never came. A three here, a basket there and the occasional stop on defense exhibited the deadly team Simpson has been all year, but the Storm were unable to put together any sort of sustained success. As a team they shot just 8-32 (25%) in the half and 4-21 (19%) from beyond the arc.

“We just couldn’t find a right combination to score. They [BV] were backing off and I think it got in our head a little bit. We were hoping we were going to make it, we never did shoot it with any confidence, and we’ve been shooting with confidence all year,” said Bjorkgren.

Sam Amsbaugh led the Storm finishing with 12 points and dishing out three assists, right behind him was Dillon Gretzky with 10.

Kennedy Drey recorded a double-double, scoring a game high 18 points to go along with 12 rebounds. Nick Clark poured in 16 points of his own to go alongside his game leading five assists.

With the loss, it marks one season in the books for Coach Bjorkgren, who says this team will hold a special place in his heart.

“I’m always going to remember this team, because it’s your first one. They’ve laid the foundation for the things we’re going to do in future years and I want them to be proud of what they’ve established at Simpson and for the men’s basketball program and to know they got it started,” said Bjorkgren. “I know I have some returners and a coaching staff…this is just the bottom row, we’re going to try to get to the second row and keep on moving up.”

Simpson graduates three seniors in Dillon Gretzky, Tyler Anderson and Leif Olson from this season’s squad, a group that Coach Bjorkgren has nothing but praise for.

“I appreciated the seniors hard work because all of the sudden here comes a new guy in for their senior year…and they were very good for 74 practices, I wish we had a 75th practice. The reason we were successful was because of all their hard work.”

Despite the finish, Gretzky was content with how his senior season played out and admired the way the team and coaching staff came together to turn the program around.

“It’s been a great year, I think we accomplished a lot of things that no one really expected. I know we were picked to finish last in the conference and we were tied for second and got the third seed, so we accomplished a lot. The first three years of my career were a struggle, we just weren’t getting those wins, but I think the experience of those first three year really paid off,” Gretzky said. “We came together, I think that’s the biggest thing. When you have a team that has all bought in including the coaching staff like we were this year, you can achieve a lot of things and I think that’s what we did. It’s been a great year, I wouldn’t trade it for anything. I love this team, I love this coaching staff and I’m going to miss it.”