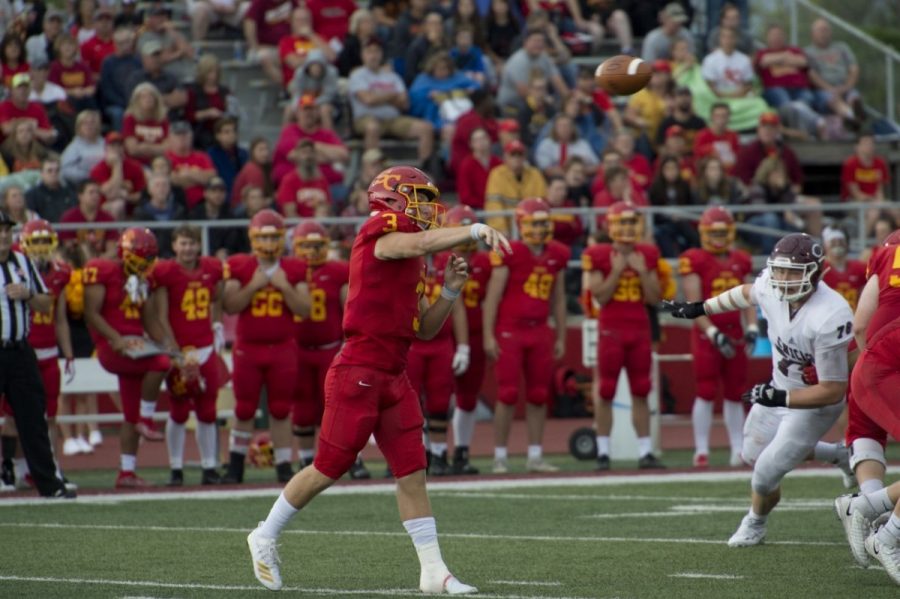 This was the second game of the season for the Storm, who was out to prove they were better than the 42-10 loss against Bethel last week

“It was a gritty, tough win for the Simpson Storm,” said head coach Matt Jeter, whose team improved to 1-1.

In the opening quarter, Krueger had a 47-yard pass to Bartlett to put the Storm up 7-0. That was one of the three times Kruger connected with Bartlett in the endzone. Bartlett was the top receiver and had 188 yards, which exceeded what he had last week.

“We always wanna give Sam Bartlett the ball as many times as we can. He makes plays and that’s why he deserves the ball,” Krueger said.

While Krueger and Bartlett were in sync, Simpson also took some risks. In the third quarter, Krueger completed a 23-yard pass to junior Joe McNally on a third-and-2. In that same drive, the Storm converted a fourth-and-7 to keep moving.

Krueger completed 24 passes for 331 yards on 41 attempts with 3 touchdowns and 2 interceptions. By the time the first half was over, he had already surpassed his total from a week ago at Bethel.

Although the Storm had a good day offensively, Chicago refused to go unnoticed and challenged the defense. Freshman Nicholas D’Ambrose had a total of 143 yards and 2 touchdowns.

Next week, Simpson travels to Dubuque to take on the University of Dubuque Spartans (1-0) in their first conference game. Kickoff is set for 6 p.m.