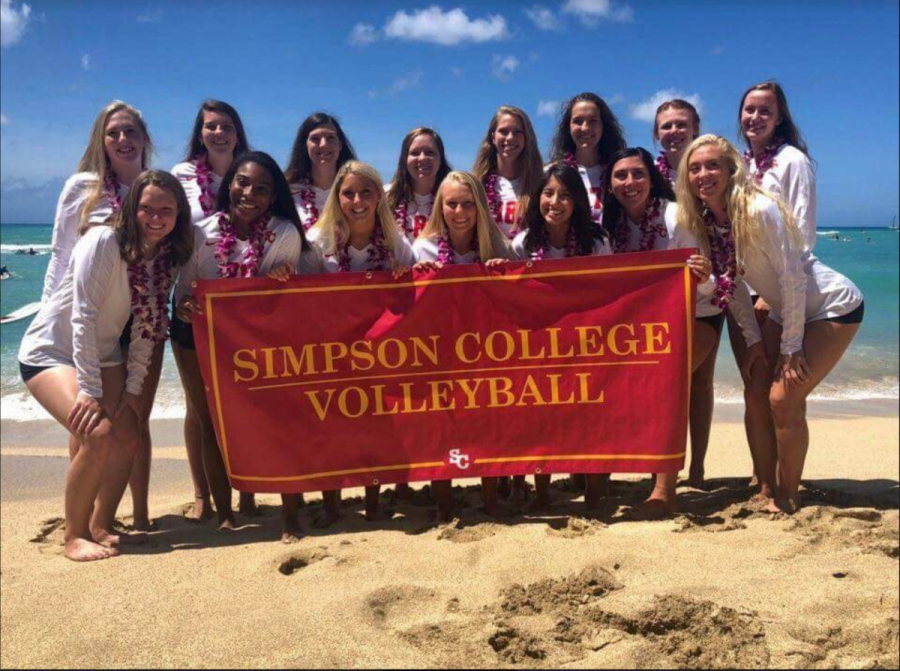 The Volleyball team on the beach in Hawaii.

This past weekend 15 members of the Simpson Storm Volleyball team headed to Hawaii and made waves on the court taking home three victories.

“We won three out of four matches and really took our matches to the max. We played very well together as a team and communicated well. We played in a hot gym with no air-conditioning,” said Emmalyn Pratt, a junior on the team. “There was a lot of positive energy between us the entire weekend.”

She also said that this type of intensity is an excellent indicator of the season to come after having only played in one other tournament this year.

“It really sets a mark for our intensity for the season and I think now we have some high expectations from our coaches and ourselves because of our performance,” Pratt said.

The time change made for an interesting addition to the weekend as the girls arrived around midnight, Iowa time. It was close to 7 p.m. in Hawaii.

The team was greeted right off the plane by receiving leis in the airport and were treated to donuts by one of the opposing teams. The squad attended a volleyball match right after to get excited for the tournament.

Off the court, the team enjoyed their time on Waikiki Beach taking in the island culture. They were impressed by the number of people they saw surfing at any point of the day.

“We experienced the culture. We got to see the people dance and some of us hopped on stage to try and learn how to twirl our hips. We watched them play with fire and saw the pig roast on the beach,” junior Blair Glendenning said.

The team also tried multiple local fruits and traditional dishes, such as teriyaki chicken. The meal is so popular that McDonalds sells it as the McTeri. It can be ordered for breakfast as well as dinner.

When they weren’t playing games, pigging out or soaking up the sun, the team ran a clinic for a local club volleyball team.

The team also got to visit Pearl Harbor.

“We did the audio tour and got to see the U.S.S. Arizona which was sunk in the battle. The memorial was like a large bridge built right over top of the ship so you could see it. I couldn’t believe the size of the ship when they showed us it in comparison to the building we were in,” Glendenning said.