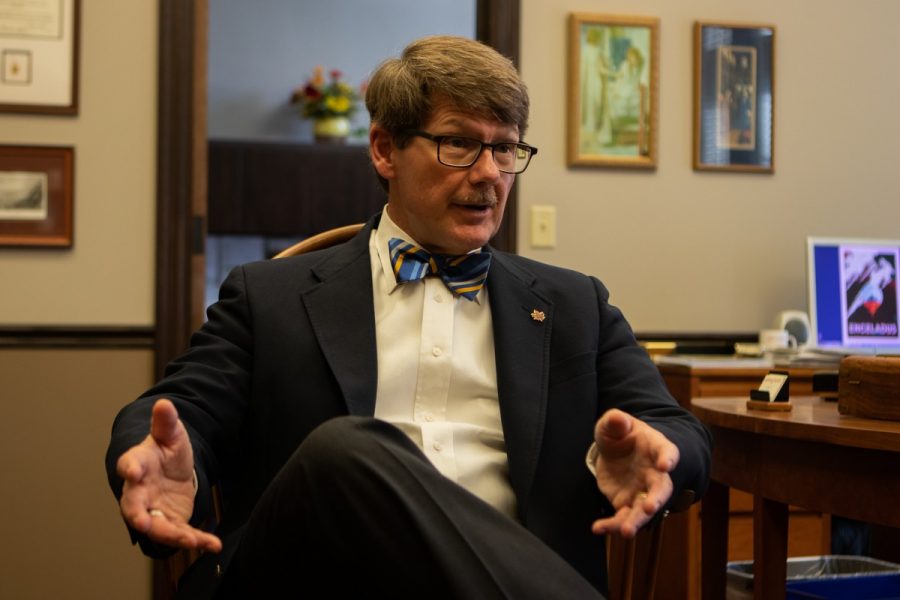 After the announcement of Jay Simmons’ departure as president of Simpson College, the Board of Trustees and Simmons have began their search for the next president of the institution.

In an email sent out on Sept. 3 to Simpson College students faculty and staff, Simpson announced the schools partnership with a nationally recognized search firm, Academic Search Inc.

They plan to meet with members of the campus community individually, in small groups and in two open forums.

“You are all highly encouraged to attend,” Wickett added.

Terry Lillis, Chair of the Simpson College Board of Trustees, explained in an email that Simpson has used external firms to assist in previous presidential searches.

As Board Chair, Lillis was charged with appointing a chairperson and secretary of the search committee.

Terry Handley is the chair of the search committee and Denise Griffey will serve as secretary.

According to the Simpson College by-laws, the presidential search committee is required to, and has filled, the following positions:

Chair of the Simpson College Board of Trustees Terry Lillis, Resident Bishop of the United Methodist Church of Iowa Bishop Laurie Haller.

“We plan to solicit the elected student leadership for their input,” Lillis said regarding the use of a student advisory committee.

Since the search is just starting, the presidential search committee has yet to find any prospective candidates

The committee plans to be aggressive in filling the position.

Simmons is under contract until July, 2020 and has offered to assist in the transition and will continue to serve in his role until his successor is named.

“There comes a point at which any President knows that he or she has has done what he or she can do,” Simmons said in his regard to the sudden resignation.

According to the American Association of State Colleges and Universities article, “The Erosion of Presidents,” the average tenure for a collegiate presidents in the United States today has dropped from 10 to 20 years down to three to five years.

The average is six and a half years.

“For the last six and a half years here, my wife and I have enjoyed being here immensely,” Simmons said. “I think it’s time for someone else to come in and think about what the future looks like for Simpson College.”

The ideal candidate in Simmons eyes is one who is active with engagement.

“It’s important to find an individual who cares about the mission of the institution, who wants to engage with faculty, staff, and students; and who is willing to be visible and present in any number of campus activities,” Simmons explained. “The role of a college president is not just to go to the office every day, but to be involved in any and every facet of campus life.”

In an open suggestion box, students also mentioned wanting a president who will improve policies, be culturally aware, reform programs to put an emphasis on networking and bring Simpson prosperity for years to come.

Simmons came under fire for various decisions made by the institution in the past such as cutting the art department, but Simmons regrets nothing.

“Colleges that haven’t done what we did last year will soon be doing it,” Simmons said. “The work we did was absolutely necessary for the future of the college. We know that the enrollment environment in higher education is difficult.

In 2018 The Atlantic released an article analysing the decline of higher education. The author provides evidence from the National Center for Education Statistics showing a decline in enrollment from 19,105,651 in 2013 to 17,839,330 in 2018.

“It’s important for colleges to do what we did and to take a look at, are we properly staffed to offer the programs that students are telling us they want to take and how do we prepare ourselves for what the future is going to look like,” Simmons concluded.

Simmons is still considering what he will do in the future.

“Retirement is a very likely option that I’m considering right now. I think Mrs. Simmons is concerned that I will get in her way if I’m around the house too much. I may look at some other kinds of opportunities too, I just don’t know yet.”

Simmons hopes to not only be remembered for his bowties but for the Simpson Promise.

“We were seeing many families that thought they could not enroll at Simpson College and the Simpson Promise has allowed us to serve those families,” he excitedly explained. “We’re all very proud.”