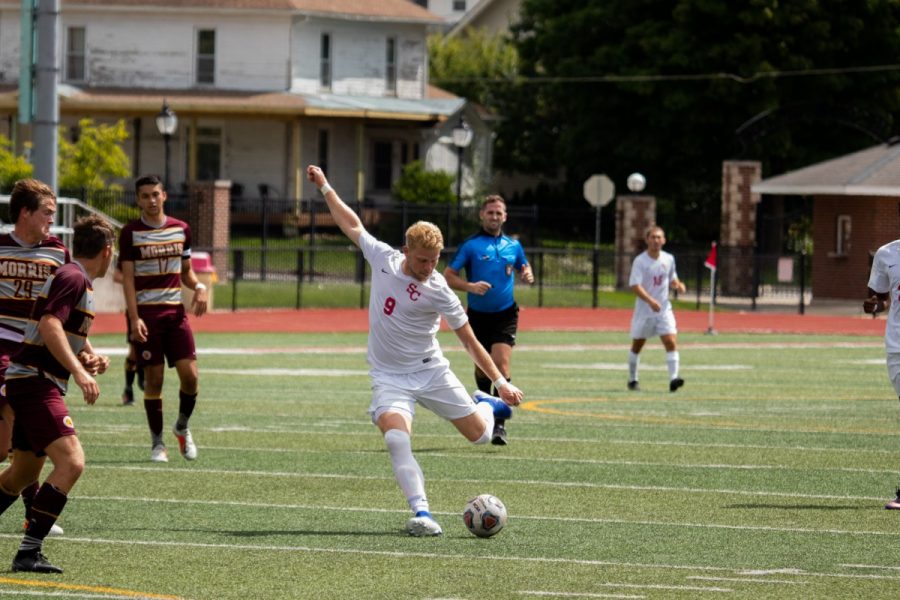 Simpson men’s soccer head coach Rick Isaacson asked his team one question ahead of the 2019 season.

Did his men want to be good, or great?

The squad is coming off an impressive season that resulted in a third-place finish in the American Rivers Conference. The team went 11-6-2 in their 2018 campaign while going 5-2-1 in the ARC. Good, but not great.

The season ended in an upset loss to Central in the first round of the American Rivers Conference Tournament. This was a disappointing end to a good season for the Storm.

The good news is, Simpson has returned with their top seven scorers from last season while only losing one starter to graduation. Simpson doesn’t need to rebuild this season, or even reload, they just get to build on their run in 2018.

“The team we put on the field this fall will not lack experience,”  Isaacson said. Simpson has 10 of 11 starters returning from last year’s team, along with 24 letterwinners.

On top of that, the team has 9 seniors on the roster this season. Isaacson has high expectations of this group of guys.

“Our senior class is nine members deep, so we’ll rely on that group to lead our team,” Isaacson said.

Something that goes together with experience is chemistry. Chemistry is something this squad does not lack. Not only do they have up to three years of playing with each other, they also were able to get a jump start this season with a trip to Costa Rica in early August.

“The week we spent abroad undoubtedly made us a closer group,” Isaacson said.

The pieces are all in place for this to be a memorable season for the Storm. The experience, leadership, chemistry, and talent are there.

Isaacson stated that this team has the potential to make huge strides.

“We are not reluctant to openly state that we expect to compete for championships in the men’s soccer program at Simpson.”

The Simpson men’s soccer program has finished third in the A-R-C for the past four seasons and were picked to finish fourth by the coaches of the conference.

They are right in the hunt to be able to compete for a title this year. A lot of pieces will need to fall into place for the team to reach their goals, but it’s certainly possible.

Simpson has qualified for the conference tournament every season in Isaacson’s tenure, including making it to the semifinals in four of them. The team’s success for the first eight years with Isaacson in charge still leaves room for growth.

Even though last year’s season was cut short by a disappointing loss in the conference tournament, Coach Isaacson thinks that this loss can be used as a good thing.

“I hope we learn from our past failures,” Isaacson said. “If past results motivate certain players then that’s just a bonus.”

Their motivation combined with their experience will be the biggest strength for the team in the ARC. The team has talent that is undeniable, but they will need to steal some games if they want to compete for the conference championship.

The Storm have already jumped out to a hot start, winning their first three games. On August 30, Simpson beat Augustana 2-0. The squad blasted Minnesota-Morris, 5-0, on Sept. 1 and beat Wisconsin-Platteville 2-0 on Sept. 4.

The Storm play their first conference game against Wartburg on Oct. 28.