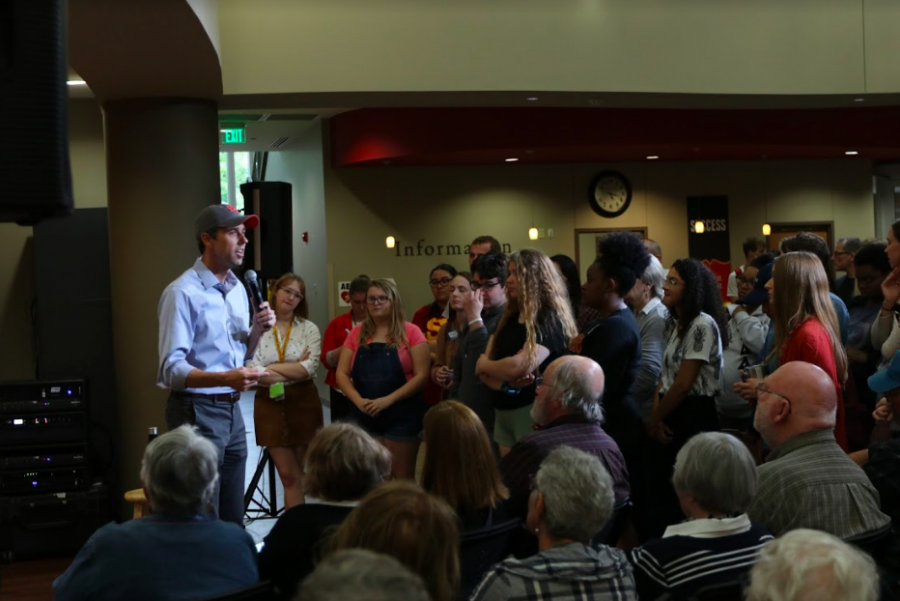 Around 100 students and community members came to see Beto O’Rourke, former Texas congressman, speak on important issues in his campaign. The town hall event was hosted by the Simpson Democrats, a student group on campus.

“I thought he was a great speaker and had good policy proposals,” sophomore Ashley Merkley said. “Some of the things that stuck out to me were his enthusiasm for all of the issues discussed and willingness to be bipartisan.”

O’Rourke gave a 20 minute long speech, opening with the topic of immigration. He says it’s important to increase humanitarian efforts. According to him, now is a golden opportunity to make sure the nation’s values align with the laws.

He then spoke about guaranteeing universal healthcare in his time as president and making sure women have the right to make decisions about their own bodies.

Among some of the topics talked about, raising minimum wage to $15 an hour, emphasizing the importance of workforce unions and making community colleges free and public colleges debt free remain at the top of O’Rourke’s list.

In his final topic of the speech, he introduced his new plan to address climate change — which includes investing five trillion dollars in infrastructure, innovation and communities. The Texas native referred to California wildfires and Missouri River floods and wants to put money towards preparing communities to fight extreme weather.

After his speech concluded, he took questions from audience members for 25 minutes.

“I want to make sure that I am the president who signs into law the Equality Act so that no American’s civil rights can be violated by sexual orientation or gender,” O’Rourke said while answering a question about transgender individuals in the military.

In an interview with the Simpsonian, O’Rourke stressed how important it is for him to visit small schools, such as Simpson College, on his campaign trail.

“I just find that this is where the leadership is in our country right now,” he said. “This is where the energy, the urgency and the drive to make the change that we need.”

O’Rourke said that in the past six weeks, he has been to 30 different colleges to speak. Specifically, he brought up how excited he was that students were passionate about climate change.

“I’ve met no more fierce advocates for confronting climate change than students in Iowa and in just about any state I’ve been to,” O’Rourke said. “Who not only understand the science, but recognize that they will live the consequences of the decisions that we make far more than I will at 46, almost 47 years old now.”

O’Rourke brought up how important it was for young people to vote and referenced that those people helped elect new Democrats in primarily Republican seats in his home state of Texas.

“Young people who are in organizations like Black Lives Matter or March for Our Lives or the Sunrise Movement are forcing the conversation on criminal justice, gun violence and climate,” O’Rourke said. “Young people change the balance of elections.”