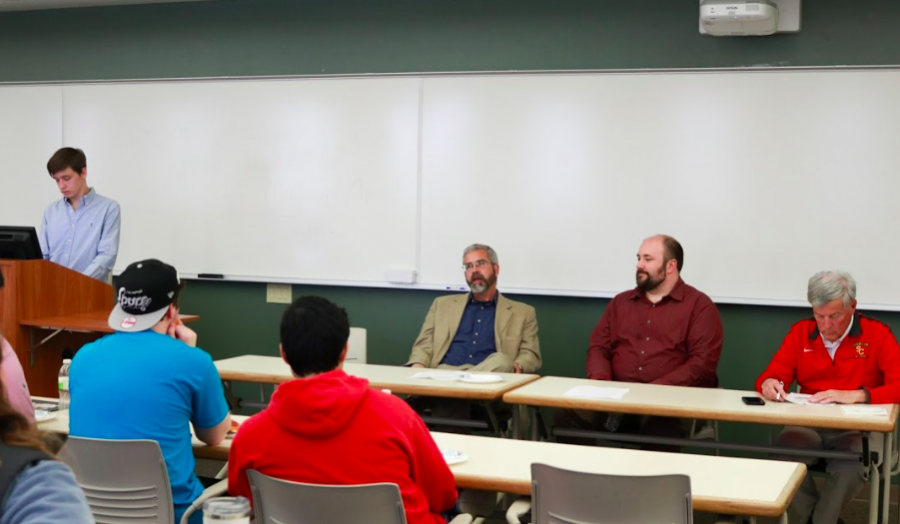 The John C. Culver Public Policy Center hosted a “Pizza and Politics” event in Pioneer Hall on April 11, where members of multiple political parties discussed their party platforms based on issues of interest to Simpson College students.

“We wanted to educate as many people about the different type of political parties. Many people live in a bubble only listening to their own political opinions. So we wanted to change that,” said Geoff Van Deusen III, sophomore, co-chair of the political events group for the Culver Center.

The Culver Center had three different people who represented dominant parties in Iowa.

Kevin Geiken, representing the Democratic party was unable to attend due to the Iowa House of Representatives being in session.

Shull made a disclaimer at the beginning that he wasn’t representing his party and discussed more of his views on certain issues.

The forum had the three people talk about their party’s views on topics that the campus voted as the most important issues.

The survey took place in Kent Campus Center. Two Culver fellows sat at a table and asked students to fill out a survey on the top three concerns were when they have when voting for an elected official.

The three speakers in the forum talked about their parties views on the issues that were outlined in the survey.

“This event was designed to give students the ability to hear directly from democrats, republicans, libertarians and greens. There are more people registered as independent than democrats or republican. Since independents don’t run for office we want to educate these voters on what these parties can really help especially if they are relatively new voters,” said Andersen

The audience also asked questions if they wanted the speaker to further elaborate on their answer or policy issues.

“I think if the audience would have had more time for questioning then we could have gotten more out of it because we could clarify,” sophomore Evan Sand said.