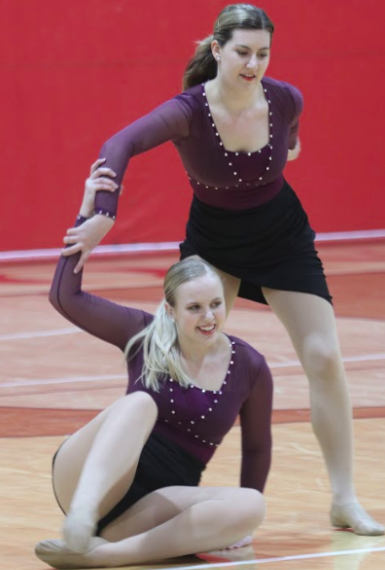 The Simpson dance team had the opportunity to compete this past weekend in the Dance Team Union College Classic in Las Vegas. The squad competed in the pom and hip-hop divisions and placed fourth and fifth, respectively.

Senior dancer Taia Veren was very excited about the opportunity and happy with how her team performed.

“I feel like we left it all out on the floor,” Veren said. “I don’t think I could have done any better and pushed my team any harder. I think we really came together at the end and put on the best performances we could. I’m really proud of what we did.”

The Storm faced teams from all around the country, including schools from Division II and III, NAIA and Junior College. There were five teams registered to compete in the pom division and seven teams in hip-hop.

Veren acknowledged that it would have been tough to place any higher against some schools that were bigger than them.

“We improved on our scores from day one, so it was kind of, like, we beat that competition against ourselves,” Veren said.

Simpson had an opportunity on the first night they were there to perform in front of the judges and receive feedback before the competition began.

“We listened to judges critiques on night one and we had practice that next morning, early,” Veren said. “We took those corrections and made changes and I think the judges really saw that. We feel really good about it.”

Normally, the team travels to Daytona Beach for Nationals. This year, they decided to head to Nevada for a chance to compete against new schools and new competition in Las Vegas.

“This experience was different in Vegas because the whole time was very fast-paced — compared to Florida where the competition was much bigger and more spread out,” senior dancer Addy Boettcher said.

“For me, nothing could top the beach, but it was cool because we got a little time on Saturday after the competition to see the sights and stuff,” Veren added. “It was fun.”

There were close to 30 total teams at the competition in Las Vegas — smaller than Daytona Beach.

“Since this was only the third year for the competition, it was still pretty small,” Boettcher said. “But every team that competed was there to win and did a really good job, so I’m really proud of how we scored.”

Earlier in the year, Simpson faced teams in the American Rivers Conference dance tournament and placed first in the hip-hop and jazz divisions. The squad is hoping to continue the recent success and build the program.

“I just hope the program continues to grow and I can’t wait to cheer on the team next season,” Veren said.