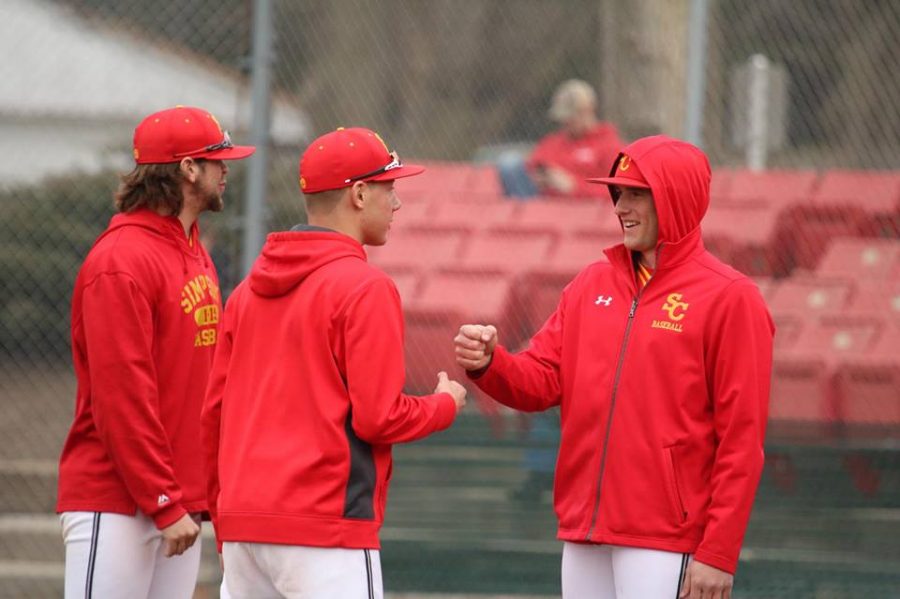 Fixing any problems and staying behind the scenes is the key to any team manager. Senior Steve Carlson does that and beyond.

The Simpson College baseball team has a lot of components when you see them on gameday. The pitcher, short stop and coaches are all pieces to the puzzle that one might think of when talking about the game.

What the average fan doesn’t see is the person who sets the field up, gets the jerseys ready, and does everything around Storm baseball. Not at the game? Twitter updates, videos, and stats that are being updated for the viewer are also done by Carlson.

You name it, Carlson has probably done it. Ask any of the players what they think about him and they will tell you they love having him around.

“He helps us out with everything. He really tries to bring the team some energy in his own way with all the things people don’t see,” junior pitcher Tanner Jansen said.

One might ask why would he do all this without any recognition?

“I do all this for the love of the game. I love being around the game, the guys, and just setting myself up for a career around baseball,” Carlson said.

Carlson did not start college at Simpson College. He first went to Trinity International University and wanted to pursue a career in ministry.

Carlson decided to look for other colleges when he didn’t want to be a pastor anymore. First, he looked home – Cedar Rapids, IA.

“I looked at Coe College first and I searched there. Then, IIAC,” Carlson said. “I went and looked at all the schools in the conference and I ended up sending an email to Simpson. They responded right away so I decided to go there.”

One of the first things on Carlson’s agenda was to get in contact with the baseball team.

Head coach Nathan Roling was just coming to Simpson College as well, and they connected right away.

“Steve has been here since day one with the team and he has been great to have on the staff,” Roling said.

Carlson has done anything coach Roling has asked him to do. This is one of the things that has helped him get to where he is today.

Carlson played baseball in high school but knew that was not the best thing for him. He still wanted be around the game in a different capacity, which is how he found his role.

“I read an article on ESPN when I was at Trinity International University, and I thought to myself that I really want to end up being the guy that makes the decisions for the team that people read about,” Carlson said.

People like Steve Carlson are people who keep teams on track and help fix any problems that might arise for the program. Next time you’re at a baseball game, keep an eye out for the secret ingredient of Storm baseball.