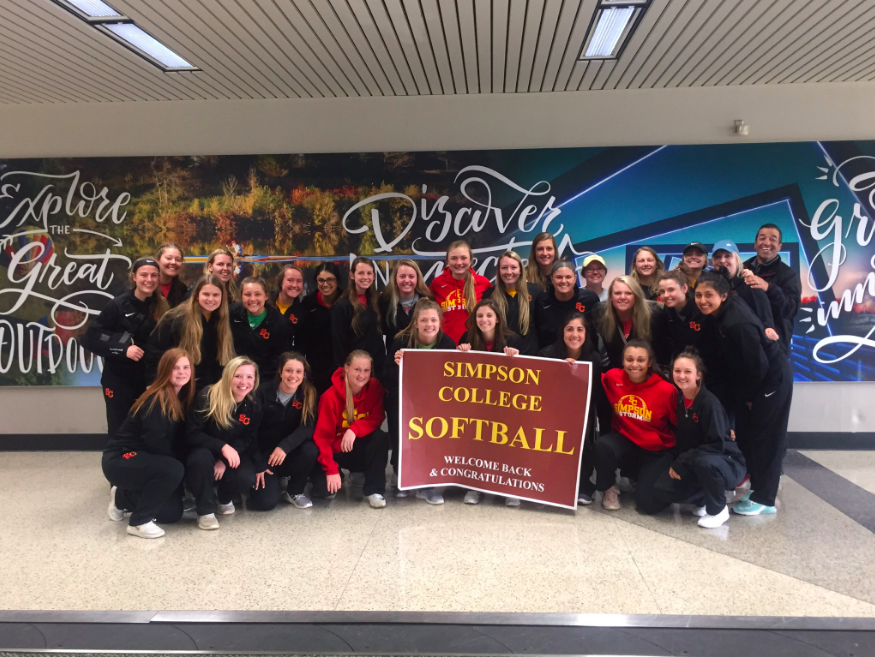 While most college students use their spring breaks to relax and kick back, the Simpson softball and baseball teams traveled down to Florida to compete in their first regular season games.

The softball team faced adversity and some tough competition, but came away with a 10-6 overall record from the week.

“We learned a lot about our team,” head coach Brent Matthias said. “All 25 players that went down saw varsity action. We have a lot of puzzle pieces to try to figure out how we create and make this puzzle work.”

The first day of action on March 8 saw the squad beat No. 18 Rhodes 8-0 and lose to Concordia 8-0. The Storm added two more wins against Potsdam and Fredonia. The game against Fredonia ended on a walk-off single hit by sophomore Sarah Trent.

Simpson struggled on day three and four of the trip, losing three out of four games. The only win came in a 15-0 rout against Pittsburgh Greensburg.

“We’re very young, and we’re trying to find some people to step up and fill some spots,” Matthias said.

Sophomore Emily Bell shined in the circle against Geneva on day five, earning her third win in the early season. The Storm lost to Roger Williams 7-4 also.

Between the next three days of competition, Simpson won five of six games, making their record 10-6 by the end of the trip.

Sarah Trent, sophomore Megan Crockett and junior Madi Bennett all had 11 hits and one home run. Bell was great in the circle, earning four wins and only one loss.

The baseball team started their season off in a big way, earning a 6-1 overall record during their time in Florida.

Both Simpson starting pitchers for the double header against Utica were dealing on March 10. Freshman Brady Held struck out 13 batters and only allowed one hit in a 1-0 win and Junior Tanner Jansen went the distance in a 10-0 rout.

“I think that it was a good way to set the tone for the trip,” Jansen said. “I think as a staff this year we are deeper than ever. We have a lot of solid guys along with Brady and I that can give solid and meaningful innings.

On day two, the Storm won an offensive battle against Curry, 11-10. The squad’s only loss came on day three against New Jersey City, 11-6.

Sophomore Kolton Arnold hit a walk-off single on March 14 to beat Beloit 10-9. On the final day of the trip, Simpson beat Crown twice in a double header to push their record to 6-1.

“I think going 6-1 was a good momentum builder for going into conference play,” Jansen said. “It gives us the confidence in our abilities as a team that we can compete with anyone.”

The baseball team plays their first home game this Friday against Buena Vista and the softball team travels to Chicago, Ill. to face Olivet this Saturday.